I was standing just inches from  the point where the stream gathered momentum before giving in to the inevitable and falling away. The energy (and the danger) were palpable. Water is heavy and when it plunges fifty, maybe even seventy-five feet over ledge and jumbled rock it doesn't go gently. It splashes, it foams and it protests noisily. It was an awesome sight and if ever there was a time and place to be in the moment this was it. But wouldn't you know, I felt my thoughts drifting...drifting to cathedrals and climbing gyms of all things. Now, what was up with that? 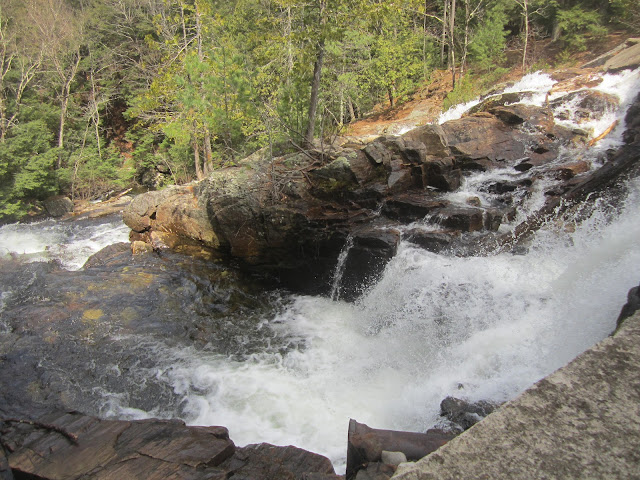 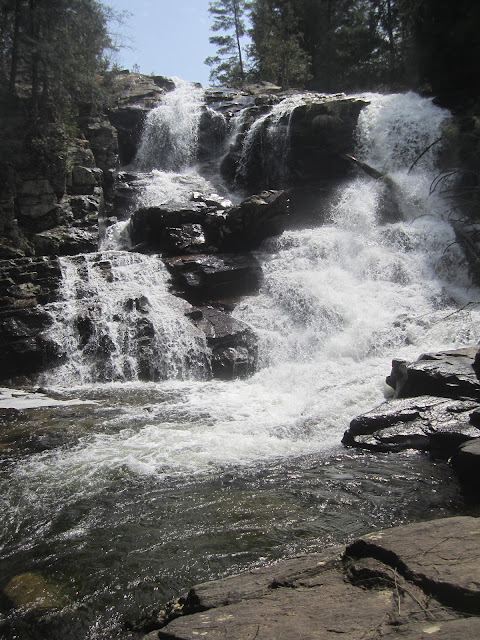 Maybe it helps to know that I was at Shelving Rock Falls, in the Washington County Town of Fort Ann. It's a beautiful and popular destination. Waterfalls like this can elicit the same emotions as a magnificent gothic cathedral. Exultation and soaring spirits in the presence of grandeur. At least that's what I and many others feel. But there are those who instead see a climbing gym type challenge. A place to test their nerve, to taste the tang of risk. It's to those that the beauty can, and too often does, turn beastly.

Shelving Rock Brook is one of many small streams that feed Lake George. It gathers on the southwestern shoulder of Erebus Mountain and drops quickly and precipitously down to Shelving Rock Bay  (aka Log Bay). The entire watershed is heavily forested with a thin patina of glacial till over bedrock. The brook's water is transparently pure which in turn contributes to the lake's famed cold clarity. In streams such as this you see the impetus for the Adirondack Forest Preserve and its goal of protecting the waters that flow from the mountains. 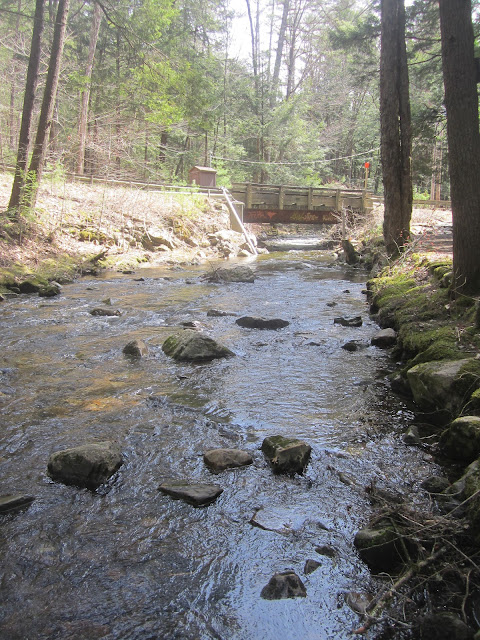 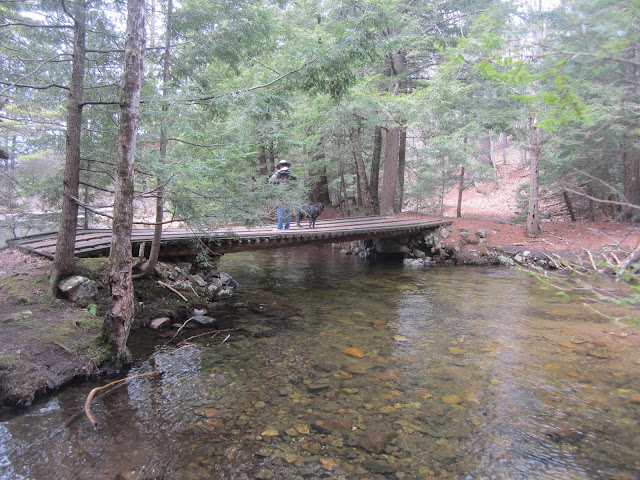 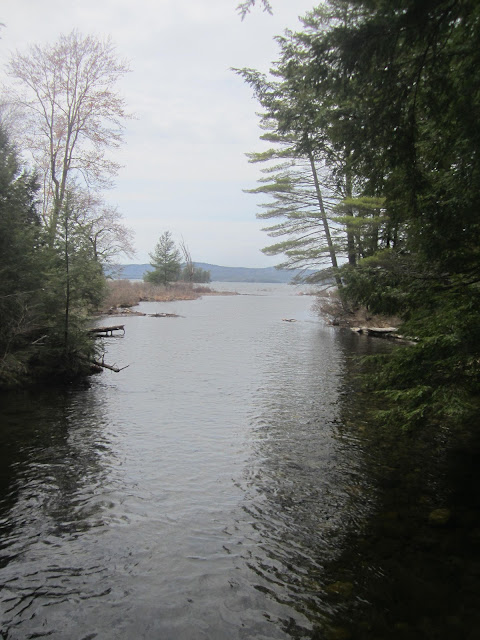 You can hike up to the falls from the lake shore but this requires a boat, which on Lake George is an expensive proposition with a relatively short season. Most people come by car via Sly Pond/Shelving Rock Road, parking in one of several DEC lots, and walking the short level path along Shelving Rock Brook. The approach is delightful and normally quite easy but when Gwenne, Zia and I visited in late April recent storms had resulted in blowdown and washouts of part of the trail. Towering pines and hemlocks add to the 'cathedral effect' and in summer the stream begs to be waded in. 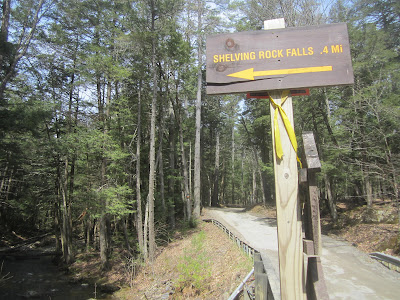 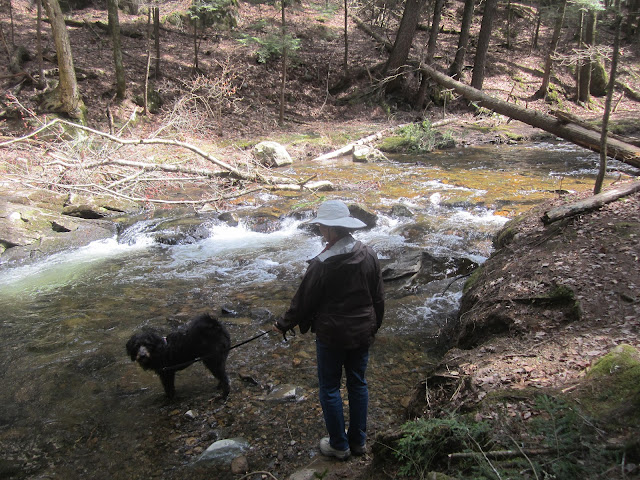 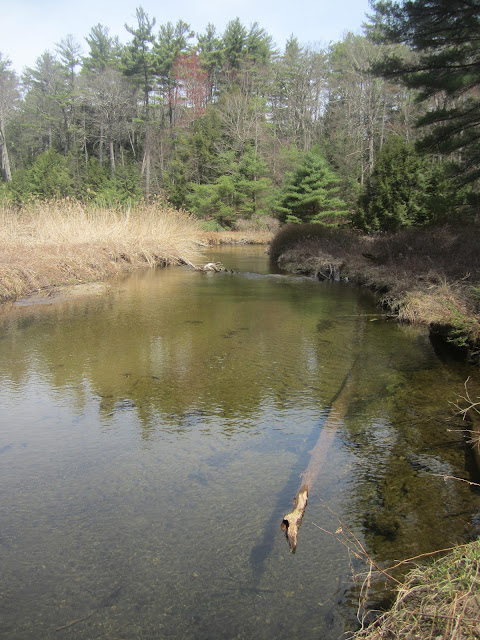 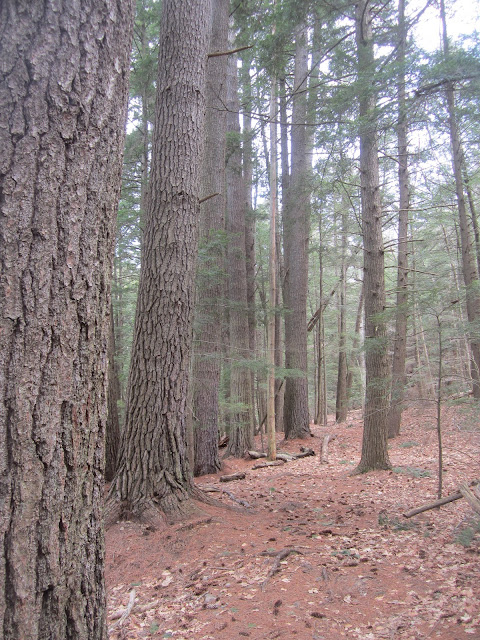 The majestic trees are a legacy of George O. Knapp whose Shelving Rock estate included thousands of acres and miles of Lake George shoreline. At the falls there was a barn, a gazebo and a power plant. You can also see insulators embedded into trees, half-buried water pipes and carefully constructed stone abutments that support old carriage paths. Most of Knapp's property was sold to New York State in 1941 for $200,000 (which might buy you a few feet of Lake George waterfront at today's prices!). 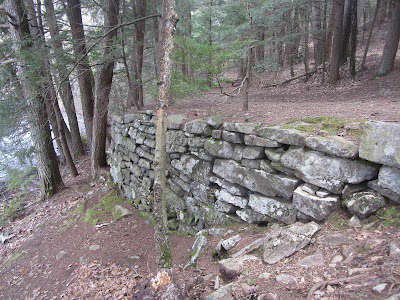 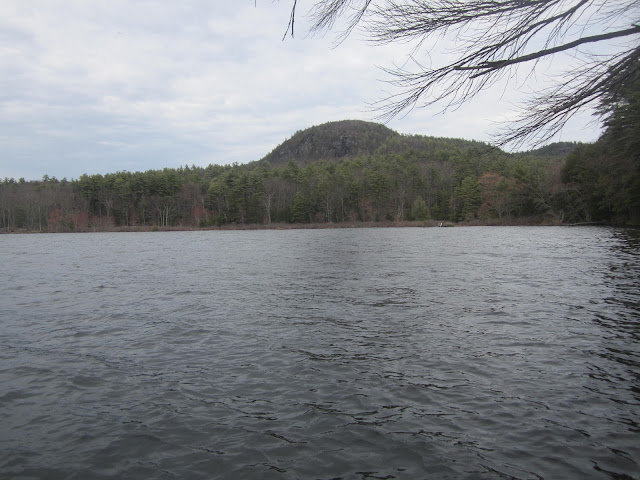 Perhaps the perfect way to spend a day here is with Elsa Kny Steinback's Sweet Peas and a White Bridge and Fred Tracy Stiles' From Then Till Now. Find a quiet spot, spread out snacks and a drink and let the two authors immerse you in stories of Shelving Rock and the east side of the lake. Now that's my idea of a good time...

But not everybody's. Log Bay used to host a notorious party day every summer when it filled with boats, drinking and debauchery. It took a heartbreaking tragedy in which an innocent young girl lost her life before authorities put an end to it. Another problem area called 'The Pines' along Shelving Rock Road became known as the site of rowdy behavior and environmental degradation. Land managers closed it off in 2004 and today the area is quietly recovering its natural beauty. And then there is the falls. It's been the scene of a number of accidents in recent years. Friends who live on the road leading to here say the sound of sirens and ambulances rushing by has become all too common during the summer. 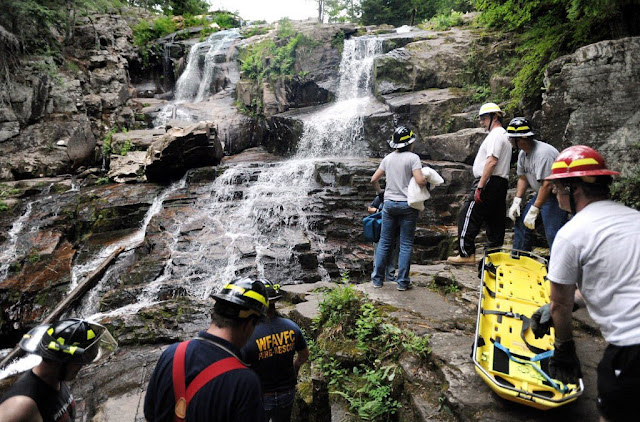 The most recent death occurred in January of this year when Timothy Gillen's body was found at the foot of the falls. In 2011 a man fell on June 30 and a week later a boy fell at the same spot. Several years ago a man and then a young girl fell on consecutive days, July 3 & 4. All suffered injuries and required rescue and medical evacuation.

Another season of outdoor exploration is here. Rivers, lakes, cliffs, mountains and, yes, waterfalls beckon. Just remember to approach all that beauty with care and respect lest you provoke a beast.