I remember that day long ago. The kids next door had found a tattered piece of plastic sheeting. We draped it over a fallen tree back in the woods. Weighted the edges with rocks and crawled into our proud creation. We were camping! Of course, we were soon joined by hordes of mosquitos. That turned out to be a short lived problem when a gusty wind blew the mosquitos and our plastic tent into the next county. Then came the rain...

Our campsite didn't cost us much ($0) but it didn't offer much in the way of comfort or amenities either. What's called camping covers a big territory. Everything from our youthful folly to well-heeled retirees sitting in their air-conditioned motorhome, munching microwave popcorn while watching a movie on a flat-screen TV. And now we have glamping. Which is what? A mash-up of glamour and camping? I'm really not sure. 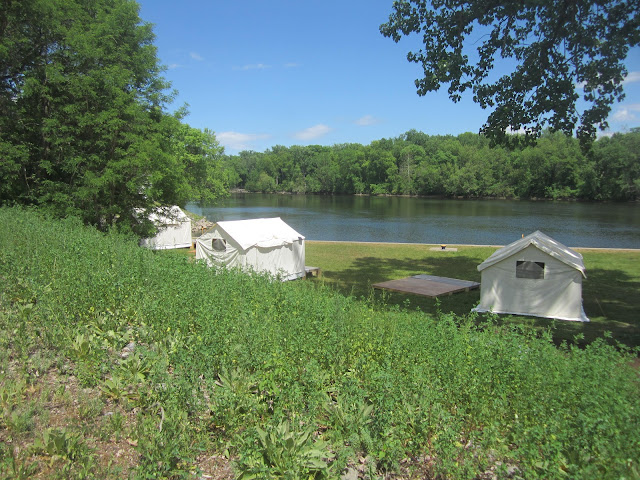 Something like that is happening at Lock 5 in Schuylerville. Several canvas safari type tents have been set up where the canal joins the Hudson. It's a nice spot, a grassy clearing between the Empire Trail and the water. An outfit called Camp Rockaway runs it and you can find all the details on their website, but if I read it right one detail stands out. A weekend stay here during the summer could set you back almost $700! Can that be true? Can anyone afford $700 to spend a couple of nights in a tent? It's enough to make a person start looking for a stray piece of plastic sheeting...

But there are options. How about The Magic Glamp in Argyle or Runamuk Farm near Cambridge. They are both tentrr sites nestled in the hills of Washington County. Then there's the French company, Huttopia, which is developing a large glampground between Lake George and Lake Luzerne. All look fun and they've got me thinking, maybe I should get with the program. Maybe hosting glampers here on the farm might make more sense than putting up hay for $3 a bale and selling milk for less than it cost to make it. 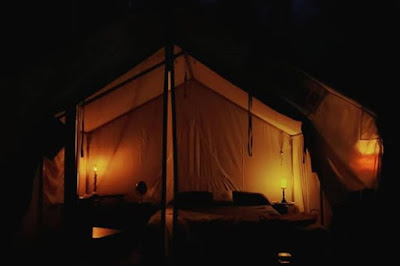 Bedtime at The Magic Glamp 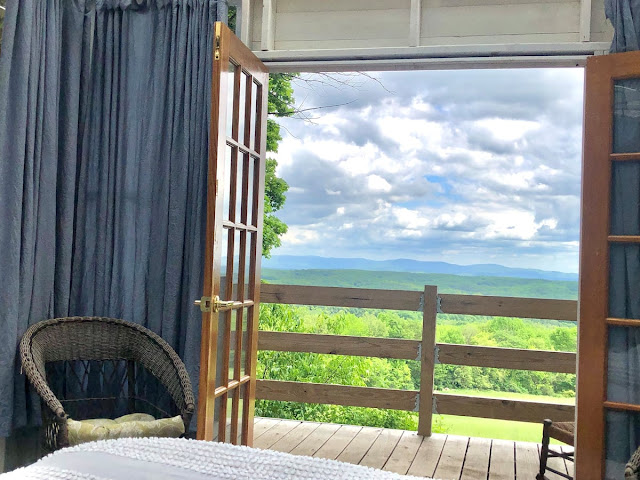 Room with a view at Runamok Farm

Also of note is Upstate Kayak Rentals which has a self-serve kayak kiosk at Hudson Crossing near the glampsite and Bigfoot Bike Rentals and Tours in Schuylerville. Everything you need to have a great time. Everything except, perhaps, a Trust Fund. 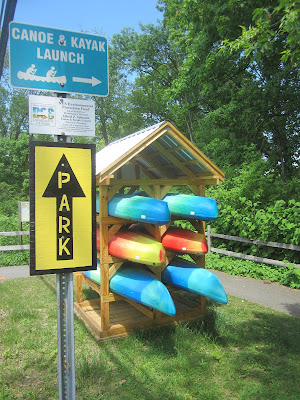 I'ld just stuck my hand in the Battenkill. And pulled it out about twice as fast.

"Not tomorrow and probably not the next day either."

I was testing the waters, thinking about the upcoming swimming season. The verdict: it was still ice water, weeks away from anything I was going to jump into. Here in the North Country there are always kids who can't resist a plunge on the first warm day of spring. They usually pop right back out, shivering and a little blue. Most incur no permanent damage. As for the rest of us, we wait with impatient anticipation. 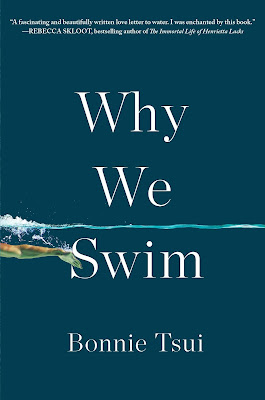 In this post I've gathered a few odds and ends that might be of interest until it's time to dive in. Let's start with Bonnie Tsui's Why We Swim. The author's answer to the question posed in her title ranges from survival to the spiritual. Along the way she introduces us to a diverse splash of swimmers, each with their own individual connection to the water. Tsui's bond with Lake George will resonate with many. Swimming out from Silver Bay towards the far shore's ledges becomes a journey of connection to a place and to people she loves.

Lake George is also the setting for Louise Rourke's account of her 2018  'swim to end polio'. In late July of that year she and Bridget Simpson did a 21 hour relay swim that raised an amazing $120,000 towards eradication of the debilitating disease. 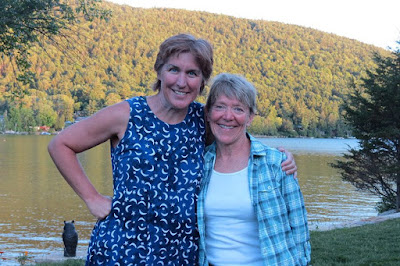 Rourke fell victim to polio as a young child, but never let it stop her from living a full, productive life. Lake George and swimming have always been a part of that life as told in Called by the Water - The Swim to End Polio, the second in a series of books published by the Lake George Historical Association. It should also be noted that Rotary International has played a big role in supporting Rourke's swim and her book as well as working tirelessly to eliminate the scourge of polio worldwide. Great organization, great work. 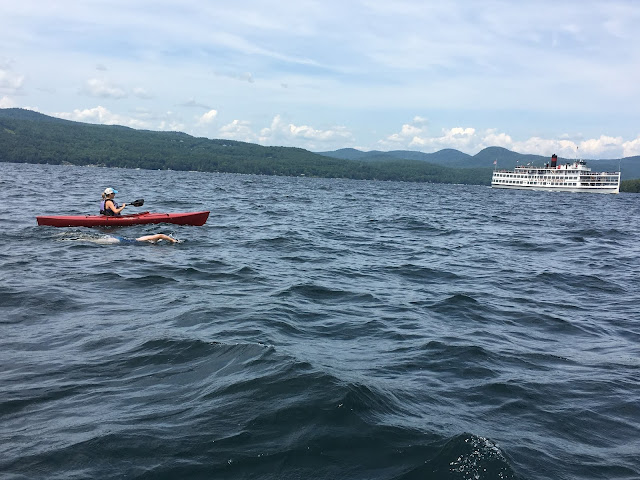 Swimming Lake George
(web image)
Other swim-centric books? How about Turning by Jessica J. Lee. It's a memoir of a young woman dealing with personal struggles by swimming in 52 lakes over the course of a year. I've also heard good things about Roger Deakin's Waterlog, Jenny Landreth's Swell and Alexandra Heminsley's Leap In. All are on my list for summer reading. 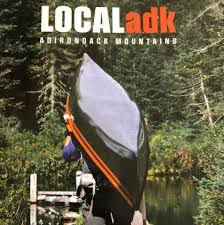 In magazines you might want to pick up the spring issue of LOCALadk. There you'll find an article by Linda Finkle profiling women swimmers and their love affair with Lake George. It's an eclectic group with each athlete amazing in their own individual way. You can access the publication online here. Also look for a swimming article in a summer issue of Adirondack Explorer covering some of the same territory.
I've heard that someone plans an end to end attempt of Lake George this season but have no further details. There's been a lot of energy and enthusiasm over the last few years with many notable swims. I hope that continues. Should also note that the Lake George Historical Museum is once again open and they've received a grant to update their Water Room exhibit. You might want to stop by if you're in the village. Finally, Gwenne will be giving a program on her Mom's 1958 Lake George swim at Wiawaka on Thursday evening, July 29th. A inspiring story told in a beautiful setting. 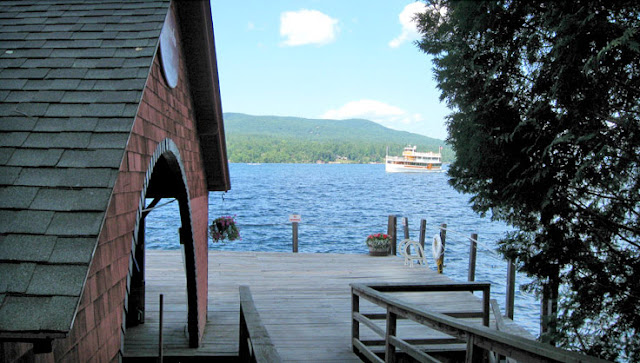 Oh, one final thing. Want to mention that I'll be attempting my annual Battenkill crossing again this summer. But not until the water warms up. Goosebumps are for kids. 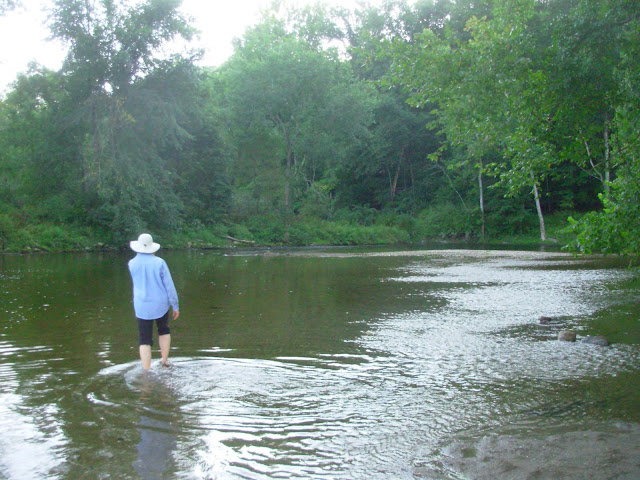 * Here's a link to Judy Collins wistful rendition of Someday Soon. Nothing about swimming but everything about longing.