Jack Kerouac wrote the book, Willie Nelson sings the song.  On the road but running late.  The plan was a "kick the tires, take her for a test drive" tour of Washington County, New York.  It would be a spring awakening of my own connection and a way to introduce the place and my blog.  But cows have their own agenda and by the time I'm done milking, feeding and cleaning it's the middle of the afternoon.  Still, it feels good to be moving through a new season with at least some of WC filling the rest of the day.

My approach is along the Hudson, up West River road:  a tasty hors d'oeuvre before the meal.  A quick stop at a DEC boat launch to dream of summer paddles then it's across the river and into WC at Fort Edward.

Here it's all about AH -- archeology and history.  First stop is Rogers Island where a visitor center and several books by David Starbuck document native American and colonial encampments.  In the village the Washington County Historical Society has a valuable research library, there's the Fort House complex and also several old canal locks.  Geography has made this a place of movement, gathering and industry. The Hudson flows south from here to the Atlantic and an old Dutch settlement that's seen some growth over the years.  To the north is a lowland route to Lake Champlain and Canada.  Geologically this is part of a great valley, faulted and floored with soft rock that runs along the western side of North America.  WC has been located near the edge of the continent going back a billion years or more and in the demolition derby of plate tectonics this has resulted in a number of collisions with other land masses.  The Grenville and Taconic orogenies are two biggies that influence rock types and land forms here to this day.  This is an abridgment akin to someone telling you, "I was born and grew into a fascinating person," but it'll do for now.

Political boundaries are human constructs and WC is no exception.  It's a north-south oriented rectangle, fifteen to twenty miles wide and sixty miles long with the top end narrowing to a shape that could be seen (ahem) as the county giving the finger to the rest of the world.
This outline happens to contain three recognized geologic/physiographic provinces:  the Adirondack Mountains to the northwest, the Taconic hills to the east and the aforementioned lowlands that trend northeast and separate the higher ground on either side.  The gift is that in accepting the county template as our area of interest, we are blessed with a diversity of rocks, landforms, waters and ecological communities.  If this isn't interesting it's the blogger's fault, not the county's.

From Fort Edward Rt. 4 does a little S move past the high school and up onto a broad flat plain that extends for miles to the north and west.  This land form is courtesy of the ancestral Hudson which drained into a post-glacial lake some 13,000 ears ago, dumping its sandy sediments into a deep, wide delta.  Well drained and level ground is ideal to build on and today many thousands of people live and work here in the communities of Hudson Falls, Glens Falls, Moreau and Queensbury. 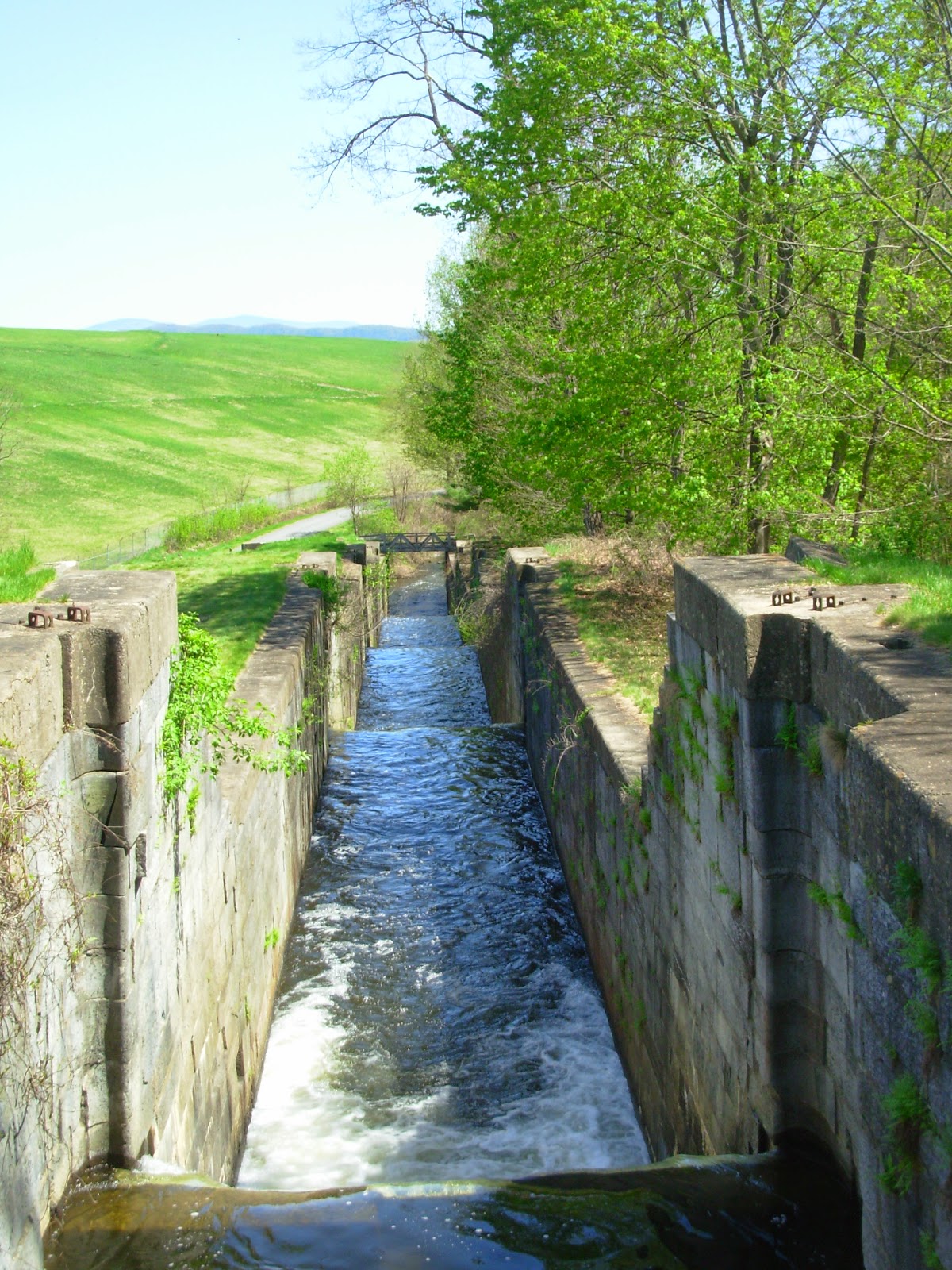 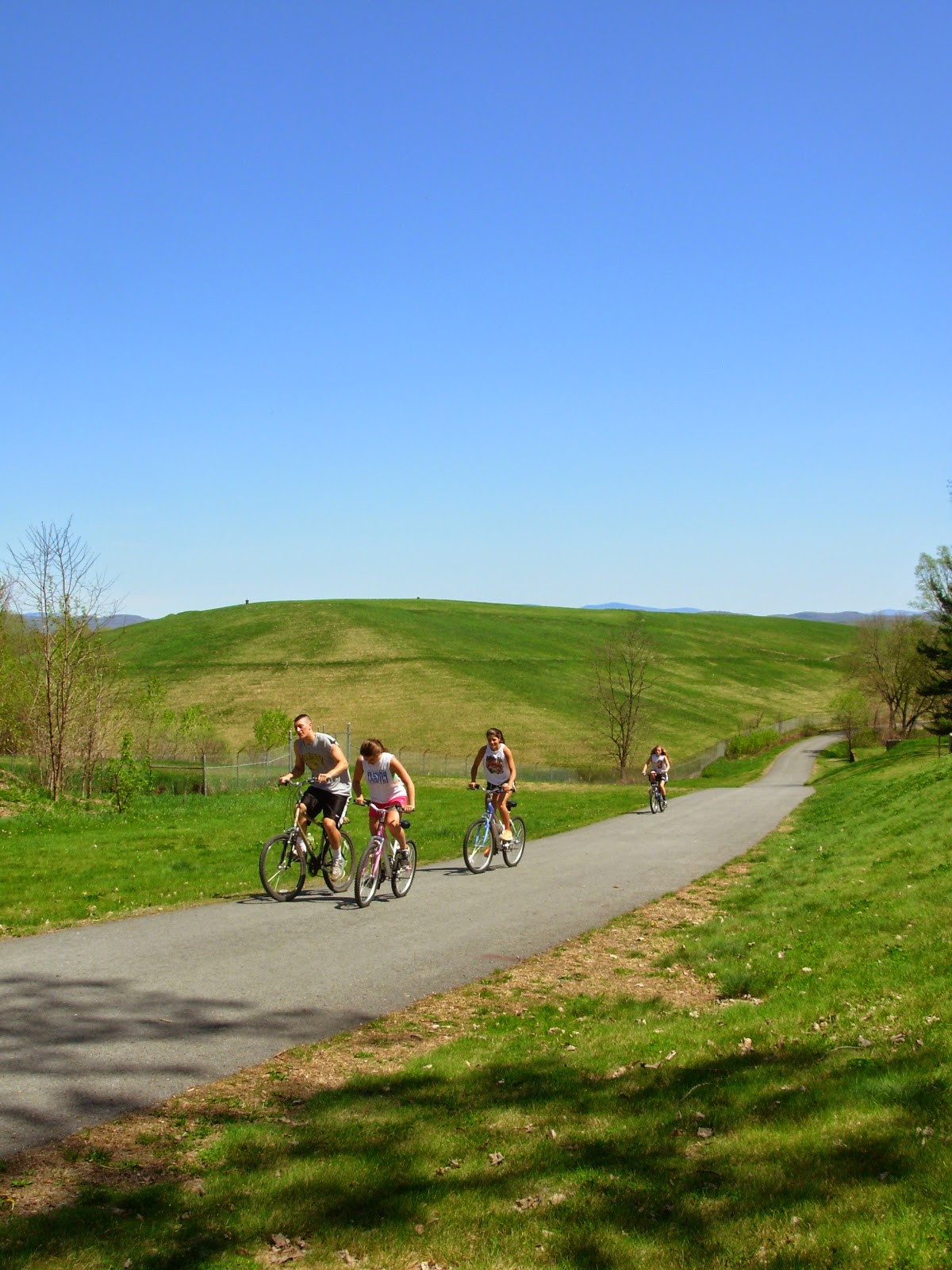 Almost two hundred years ago a channel was dug from an upper level of the Hudson to connect with the old Champlain Canal.  These waterways spurred industrial and commercial growth with heavy traffic of stone, lumber and agricultural products.  Today the Feeder Canal is mostly used by ducks, canoes and kids desperate to cool off on hot summer afternoons.  It's also the site of a popular linear park where dog walkers, joggers and cyclists have replaced mule teams pulling canal boats along the towpath.

This is where William Bronk used to walk, observing nature and collecting images for his poems.  Like other creative people past and present WC was his muse.  Sitting beside the canal on this warming Sunday afternoon, I'm struck by how the land can mean many things to many people: commerce, recreation, inspiration.

From Hudson Falls I wander north thru rolling farm country underlain with limestone and dolostone, remnants of the carbonate shelf of ancestral North America.  The rock has long been quarried here providing needed products and employment.  There are active dairy farms but also many abandoned barns, as consolidation results in fewer and larger operations.  The grass is green, I see a few heifers out on pasture, but little tilled ground as the spring has been slow in unfolding.


Ahead are views of the Adirondacks, high rugged terrain created by old metamorphic rock pushed up thru the flat overlying sedimentary layers.  I cross Halfway Creek which drains this area flowing east into the Barge Canal.  The warm afternoon has planted many people in their gardens and also creates long lines at the Milking Parlor scoop shop (vanilla cremee with toasted coconut dip!).

Blame it on the sun, the ice cream, the feeling that summer was giving me a "come hither" look,  I felt the lake calling. The WC grand tour, a bit ambitious to begin with, would wait. Lake Champlain and South Bay, the Poultney and Mettawee,  even my old friend the Battenkill would be there another day.

So it's up past Hadlock Pond with an iconic scene of a single canoe enjoying its serenity and then the climb over and down the mountains that frame Lake George.

Just past the Inman Pond trail is the site of Hillbilly Heaven/Hogtown Inn  where Willie Nelson is rumored to have played.  No red-headed stranger sitings today, probably because the place burned down in 1987.  It's sorely missed after hot thirsty hikes when it's time to rehydrate.

There are several trailheads along Sly Pond/Shelving Rock Road and all had cars but Sleeping Beauty's parking lot was overflowing.  I stopped to talk briefly with a couple from Florida of all places.  They had the slightly frazzled, slightly smug look of people who had just finished something hard but satisfying, Sleeping Beauty being a couple of thousand feet higher than anything in their home state.  Judging by the number of cars the top must have seemed like the mall on the day before Christmas, but with better views.

From here the adventurous dirt road twists down towards the lake.  It's adorned with free campsites, streams in free fall and lichen encrusted ledges.  At the bottom short paths lead to the water and there is a trail that strings together rock outcrops, tiny beaches and shady nooks.  It's all yours:  the forever wild forest preserve of the Adirondack Park.

This is the WC shore, well worth the effort to get here.  Today there are families having picnics, lone sunbathers stretched out on smooth rock and a few early-adopters dripping frigid water.  Boats are zipping where solid ice held sway just weeks earlier.  I lean back against a pine tree, blue water lapping my feet, warm sun on my face and marvel at the fact that on a lake with multi-million dollar "camps" a poor farmer like me can enjoy all this for free.  As the saying goes, "At either end of the social spectrum lies a leisure class."

One nap later I head back up the road a few hundred yards to a pull-off with an old Toyota pick-up, some Suburu wagons and an unmarked trail leading into the woods beneath a rising ledge.  Signs of the rock climber.  A short hike in and I hear voices, "Smear your left foot on the bulge then reach right for a hidden jug."  Two guys connected by a rope and adrenaline are piecing together a line up the broken rock.  These Shelving Rock cliffs have become very popular in recent years but I'm feeling the nostalgia of long ago when I used to carry a rope and rack here.  I still remember standing at the bottom of a corner/crack that soared several hundred feet straight up and vocally bemoaning the huge patch of poison ivy that guarded the start of the climb.  Secretly I couldn't have been more grateful for an excuse to avoid a route that was literally and figuratively over my head.

Climbing is all about connection:  with rock and gravity, with your partner, with focus and control.  Back at the Sleeping Beauty parking lot, I find another kind of connection between two women and their horses who've just completed a ten mile trail ride together.  The joy the girls take in their beautiful animals (one buckskin, one bay) is shared by hikers returning from the mountain.  Kids were reacting like it was Christmas morning and they'd come down the stairs to find gifts under the tree.  Only here the trees were a hundred feet tall and the gifts whinnied. 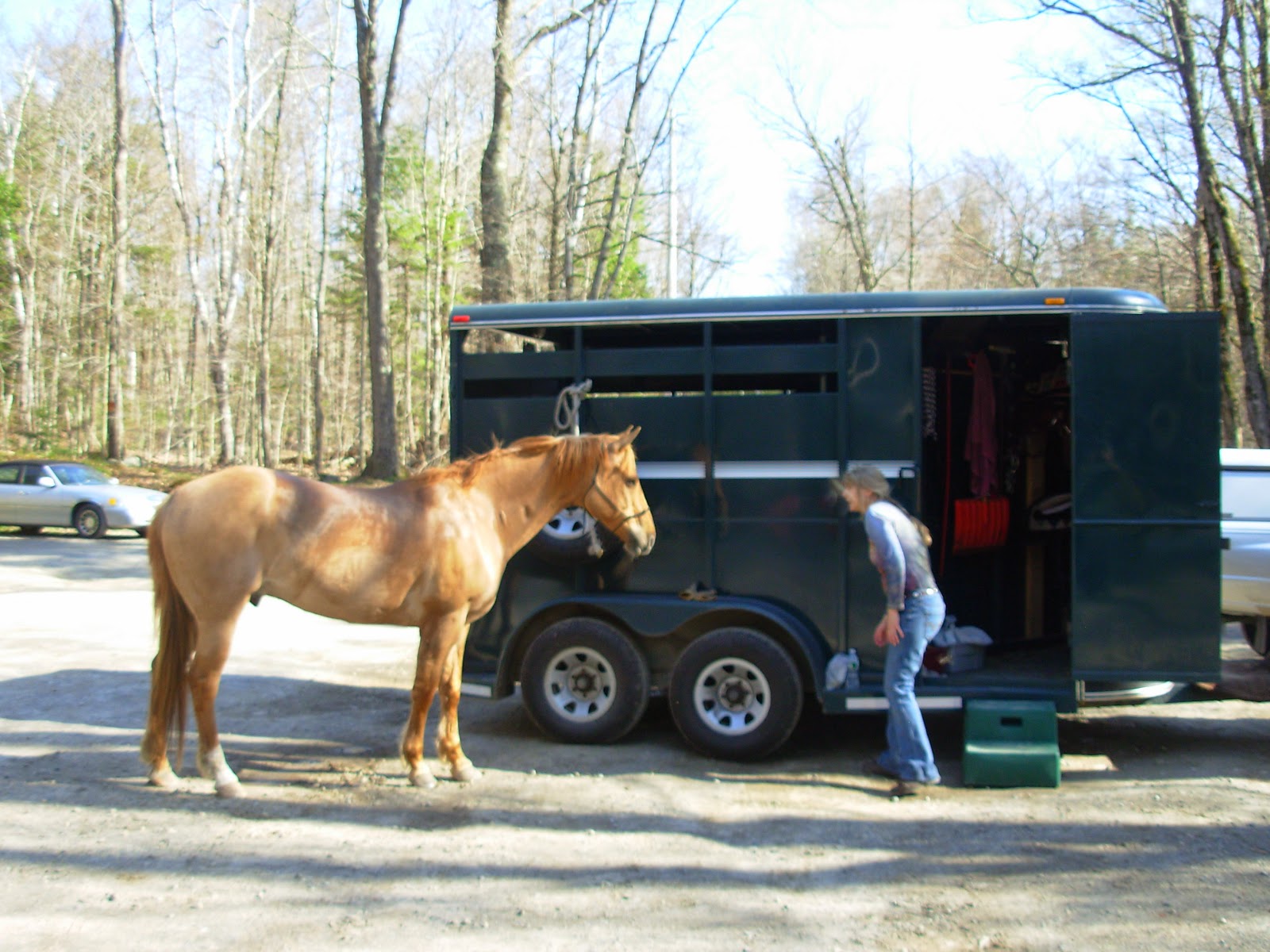 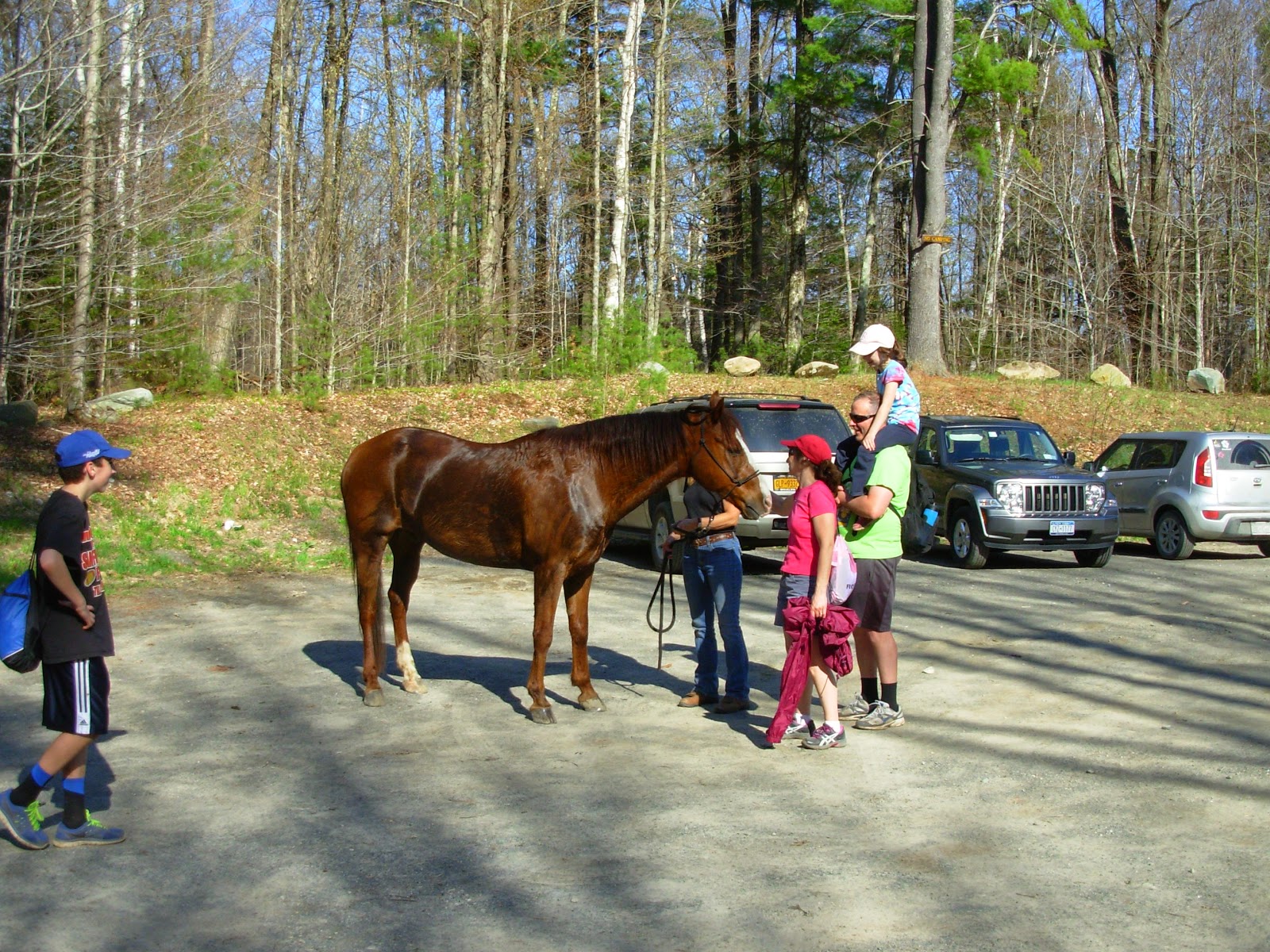 Late in the afternoon I indulge in one of WC's classic experiences:  the drive down Hogtown Road.  Dropping steeply and dodging the north end of Putnam Mountain, the road is joined by clear-eyed and energetic Mt. Hope Brook in a wooded ravine.  Ah, the stories this stream could tell.  Follow it back into the woods and 150 years back in time and you would come upon a scene of frantic industrial activity as iron ore was mined, smelted and shipped down Lake Champlain from the wilds of WC.  The huge stone furnace still stands deep in the forest, an enigmatic monument to ingenuity and hard work.

Hogtown Road eventually delivers me into the upper end of Welch Hollow.  Shaped like a big funnel, it's open farm land to the south narrowing to a tight slot with just enough room for a road and brook before reaching South Bay in the north.  Here is the head of Lake Champlain which will deepen and broaden all the way to Canada and beyond.

The Hollow is a lovely place framed by the Putnam Range to the west and a rugged, rocky ridge on the east side that marks the edge of the Adirondacks.  The photo backing my header is from West Road looking across the valley to the Pinnacle, Orebed Hill and Big Notch. 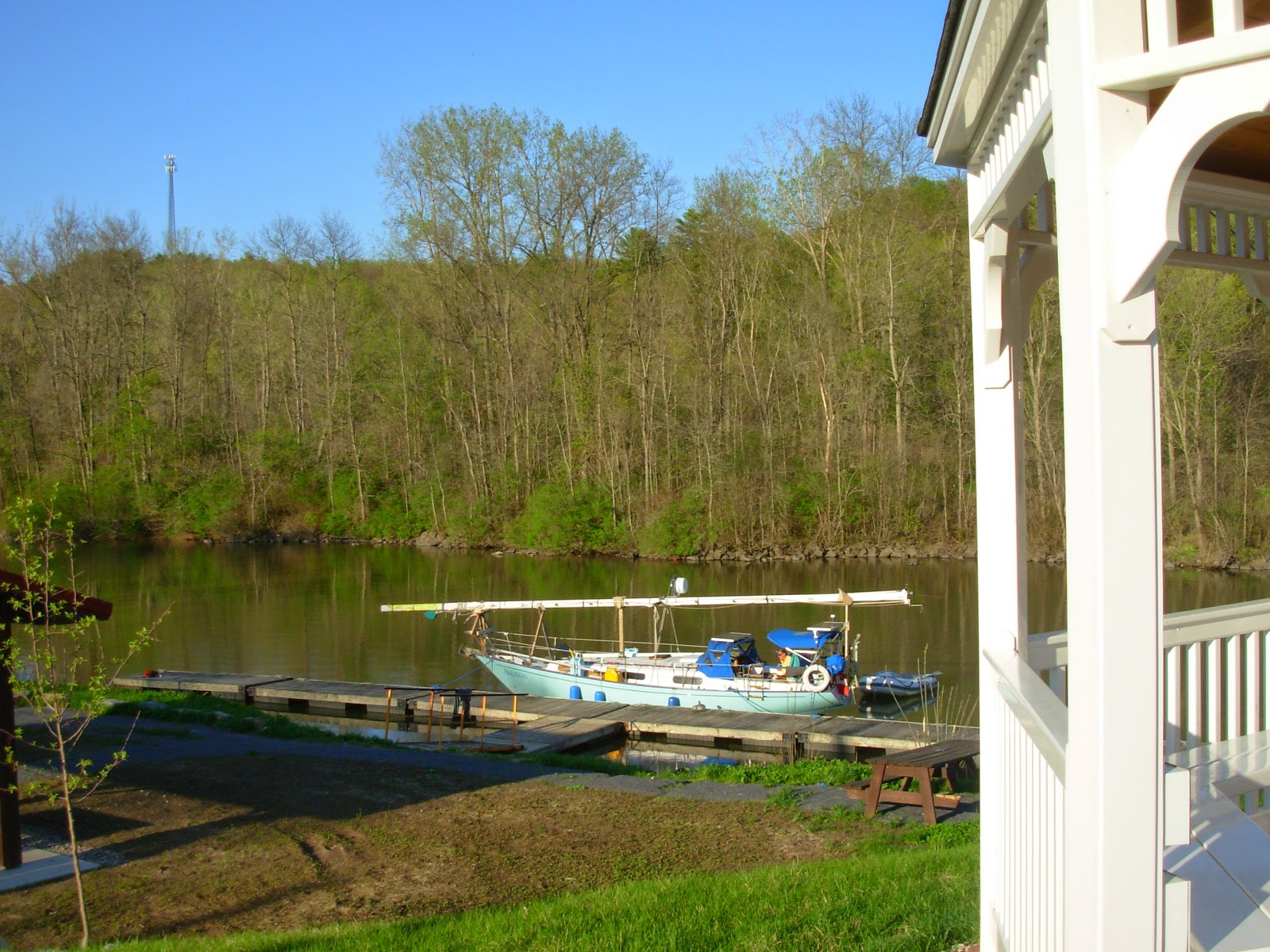 Past Kanes Falls where Halfway Creek drops over a faultline scarp, I stop briefly in Fort Ann.  Here Route 4, the railroad, the barge canal and the old Champlain Canal locks lie within a few feet of each other, all speaking of the lure of elsewhere.  There is a small marina on the canal with a gazebo, a picnic shelter and a dock.  Local kids are hanging out and one sailboat is moored with the couple on board enjoying an evening glass of wine.  Tomorrow the kids will still be here and the boat will move on. 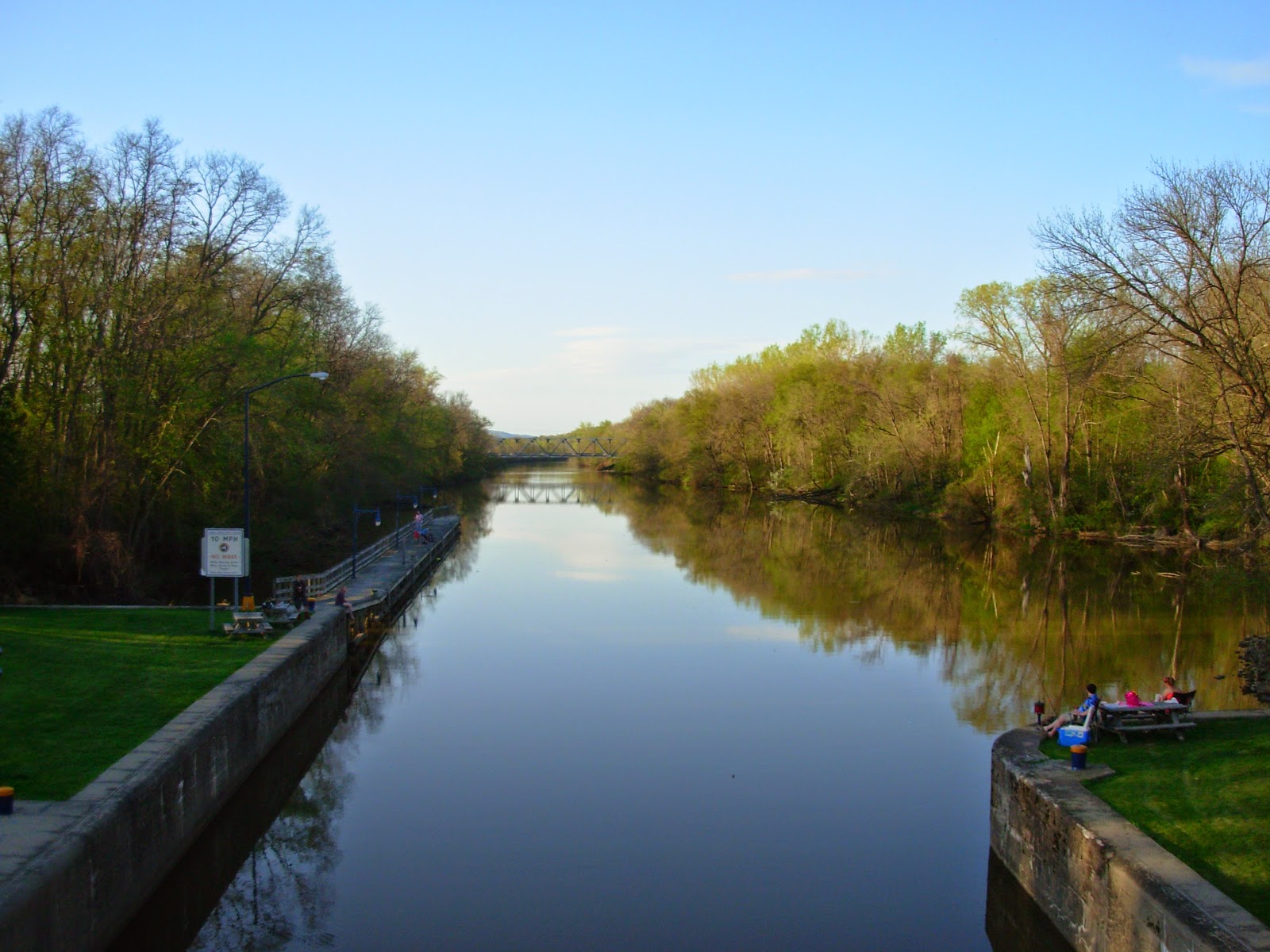 A few miles south I pull into lock nine of the canal at Smith's Basin.  It's a sociable scene with small groups sitting in lawn chairs, exchanging pleasantries, wetting their lines.  The soft warm evening has everyone in a mellow mood.  I lay back and let the day sink in.  I'd gone looking for place and found people.  I sensed how people and place need and nurture each other and how right that felt as dusk settled on Mother's Day, 2014.