I've caught Mercury a few of times in recent days. Quite a feat when you consider that the tiny planet orbits the Sun at a breezy 112,000 mph. Of course, what I mean is I've 'caught' a glimpse of it above the southwestern horizon shortly after sunset. Even that is nothing to scoff at. Because the inner-most planet never gets far from the Sun it's notoriously hard to see. Viewing alternates from just before dawn to just after sunset. For reasons of orbit and inclination it has been relatively easy to spot recently. While it's starting to sink and fade you should still be able to see it for the next couple of days. Try looking low in the southwest about 6:00 pm. Binoculars, a clear sky and a little luck will help. 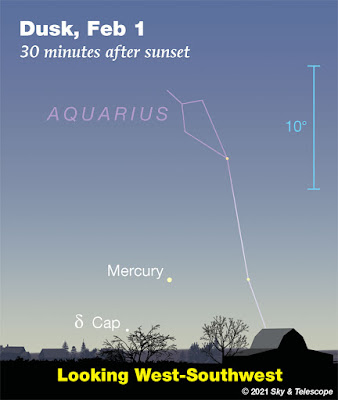 From Sky and Telescope

I think of our solar system as a big, diverse, raucous family. The Sun holds everybody together, but just barely. Many of the siblings have large families of their own, with Jupiter and Saturn having many dozens of moons between them. Mercury is definitely the runt of the litter, but it makes up in energy and eccentricity for what it lacks in size. Here's a brief portrait... 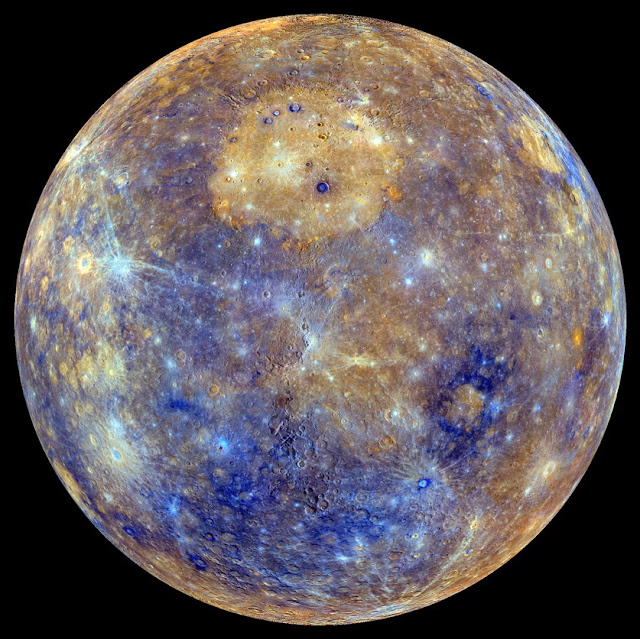 * Mercury is the smallest planet (remember that Pluto is no longer consider to be a planet). It's only a little bigger than our Moon and actually looks like the Moon with lots of craters. Both Jupiter and Saturn have moons larger than Mercury. To add insult to injury, Mercury is actually shrinking as it's iron core cools.

* Maybe there's a reason that Mercury and the Moon look alike. One theory posits that in the distant past Mercury collide with the Earth and the resulting debris came together to become our Moon.

* Mercury takes 88 days to orbit the Sun in a highly eccentric, egg shaped path where it's distance from the Sun varies between 29 million miles and 43 million miles.

* It rotates on it axis once every 58+ earth days but because of the speed of it's orbit a day/night cycle (what we would think of as a day) takes 176 of our days.

* Because it has almost no atmosphere to moderate temperature, the difference between its sun lite side (800 degrees F) and its dark side (-290 degrees F) is extreme. Of the planets, only Venus is hotter. Given enough time and foot dragging on climate change, maybe Earth can catch-up.

* While Mercury has no moons, it does have lots of craters and they have traditionally been named after famous (Earth based) writers and artists. Basho, Booticelli and Copland are all there. 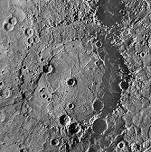 * The Sun appears three times as large in Mercury's sky as it does here on Earth. If you love sunrises and sunsets Mercury may be your place. In an odd artifact of Mercury's rotation and orbit the Sun can be seen to rise, hesitate, and then sink back below the horizon before rising again. Sort of like me trying to get out of bed in the morning. The same phenomenon can sometimes be seen at sunset.

Forget about booking your flight to visit this strange world. It's really quite hard to get too with only a couple of spacecraft having made the journey. I believe there's one on the way now but not due to arrive for several years. In the meantime try for an evening sighting on the next clear night. Just remember to bundle up because January is finally acting like...well, like January. It's cold out there. 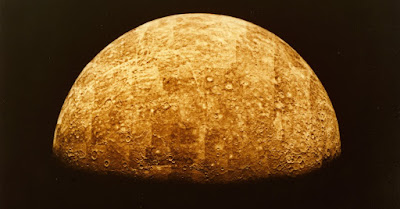 I've got a remedy for the mess in Washington. Trump, McConnell, Pelosi...they should all just take a relaxing bath together.

No, not that kind of bath! They don't make a tub big enough to contain all those egos. I'm thinking of a forest bath. Perhaps you've heard of the practice. It originated in Japan where it's called shinrin-yoku. Participants immerse themselves in nature. Ideally in a forest where they slowly connect with all their senses. It's said to lower blood pressure, sooth roiling emotions and foster creativity. Just what's needed down in D.C.

My introduction to shinrin-yoku was a 2012 article by Florence Williams in Outside magazine. A 2017 book followed: The Nature Fix: Why nature makes us happier, healthier and more creative. Now you can find many books on the subject, including several in our local library system.

You might (legitimately) ask "Do I really need a book to tell me how to walk in the woods?" I know that's what came to my mind. Just the phrase 'forest bathing' seems to elicit a giggle. The thing is, most of us have already developed a relationship with the forest. Relationships that can vary widely. 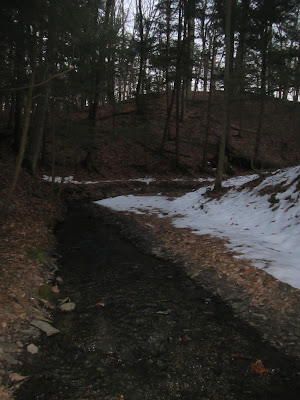 For some, the woods are dark, scary places full of creepy-crawlies and ravenous beasts. Places where you get lost. Best avoided. Others are at home here. They see the forest as a playground. From hide and seek to building forts as kids to hiking, camping and all manner of recreation as adults. Then there are those who take a scientific approach: identifying species and studying ecological relationships. Another groups livelihood depends on trees...foresters, loggers and maple producers. Finally, this being a capitalist economy, there are people who see wooded acreage as opportunity to clear, subdivide, develop and sell for a tidy profit.

So, we all know our mind and then along comes this weird, touchy-feely Japanese thing called shinrin-yoku. It's like you need 'couples therapy' to see your relationship to forests in a new way. Still, the books I read painted such an enticing picture that I was willing to give it a try. 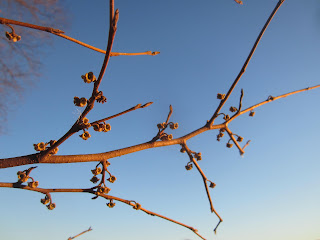 My 'try' at forest bathing unfolded something like one of those Hollywood romantic comedies where the lovestruck couple have to endure all manner of obstacles and setbacks before finding bliss together. I wanted to do a little research first but it's become hard to get books out of the library and harder still to find time to read them. Then a monster snow storm hit making even a short walk in the woods on par with a polar crossing. After spending a week straight plowing and shoveling I watched record warmth and deluge wash all the snow away. For a few days any walk would be a walk in the 'rainforest'. Not exactly what I had in mind.

Patience is a virtue, possess it if you can

Seldom in a woman, never in a man

While the aphorism has a lot of truth, I patiently hung in there until there came a late afternoon, cold but clear with blue skies and a low sun tinting the landscape with rudy hues. All I had to do was climb out of the skid-steer (not that easy at my age), walk across a hay field to the north woodlot and (drum roll), I was forest bathing. 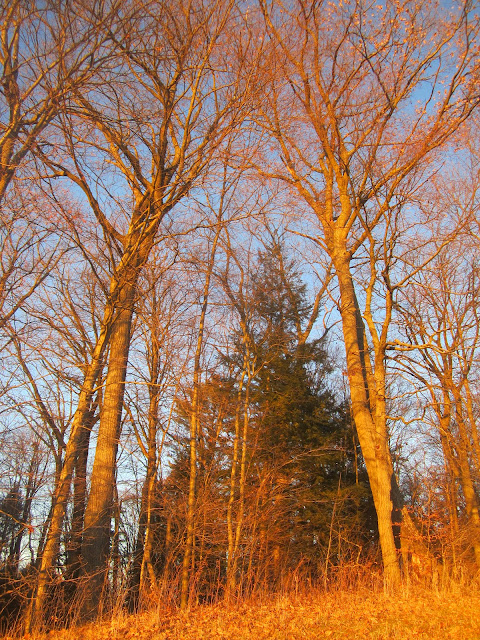 As easy as that? Well, not quite. First thing I did was take off my gloves. I wanted to feel the bark on various trees, the smoothness of twigs, the papery texture of a beech leaf. Engage the sense of touch. Seemed like a shinrin-yoku type of thing to do and it was but, of course, I forgot to put the gloves back on and when my hands started getting cold I had to go back and search for them. 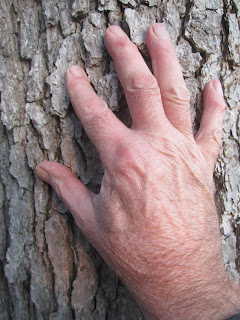 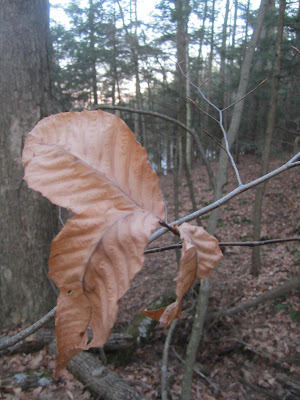 All the books urge you to seek out running water if possible. The musical sound, the negative ions, the dappled rippling energy are what you want. My woods have a stream that burbles thru a small shale gorge. It's a lovely spot that I've been visiting since way before forest bathing was a thing. But today the sunny side had softened into slick mud while the shady side was ice and snow. Add the challenge of clambering over several wet, mossy fallen trees and my senses were more attuned to survival than soothing water. 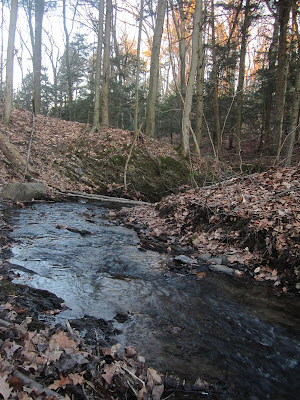 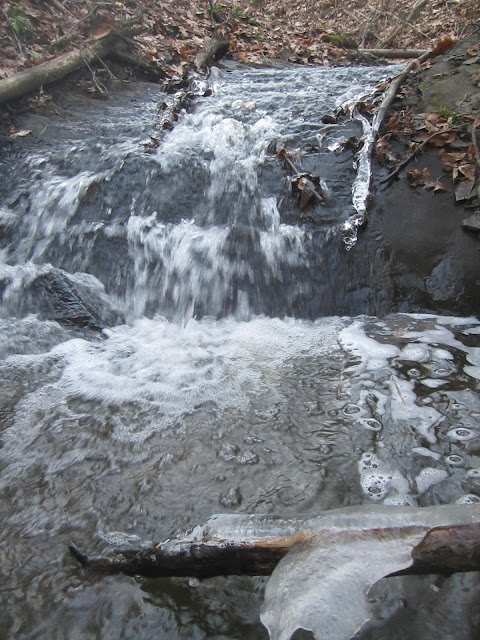 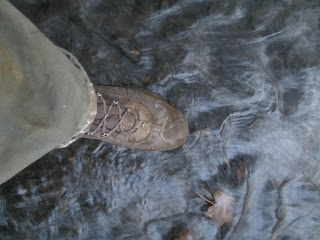 It's a steep climb from the stream back up to the level. In fact, for a work out I do hill repeats here several times a week. Today, I couldn't help but drag some fallen limbs out of the way, do some tidying up. Then, once on top, I puzzled over what do do with a tangled blow-down, aftermath of a windstorm several yeas ago. It was blocking my woods road, a real mess. But I soon realized this was messing with my forest bath, blocking my sensual experience. 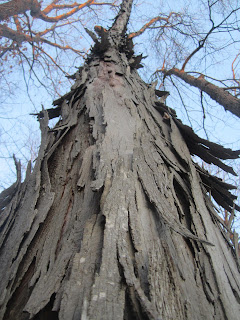 Therein lies my problem with shinrin-yoku. I have a long, established relationship with these woods. I learn here with field guides and notebook. I work here with saw and tractor. I play here with running shoes and skis. It's like a marriage. Perhaps it could use some freshening up but old routines and habits are hard to break. 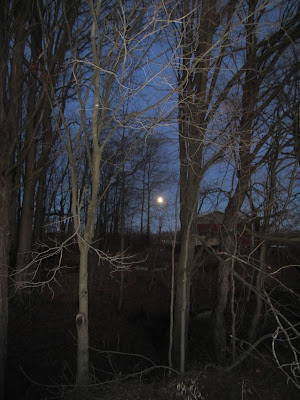 As darkness settled I was treated to a full moon rising in the east. Branches silhouetted before its shining face made a nice visual. Once out in the open field I could see Jupiter and Saturn low in the southwest. After what seemed like weeks of storm and cloud this was my first sighting of the pair since well before their great conjunction.

First dates can be a disaster or the start of something beautiful. Sometimes both. My first date with forest bathing had its challenges, but also its rewards. We'll see where it goes from here. Good thing I'm patient. 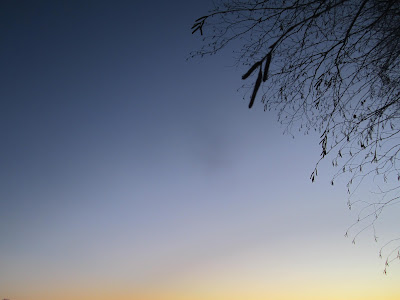 Posted by Don Butler at 8:18 AM No comments: