All doctors write prescriptions. Some doctors write books. I'm thinking of Dr. John Rugge, who recently announced that he was stepping back from treating patients after a 46 year career. Dr. Rugge is well known in the North Country, both for his role as personal physician and also for founding the Hudson Headwaters Health Network, whose centers provide care for many thousands every year. 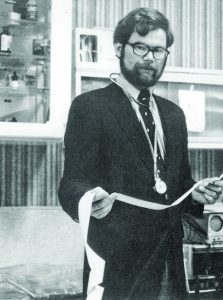 A young Dr. Rugge, early in his career 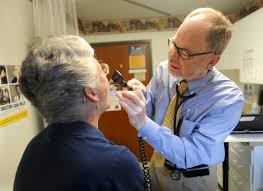 A more recent photo of Dr. Rugge with a patient
web images 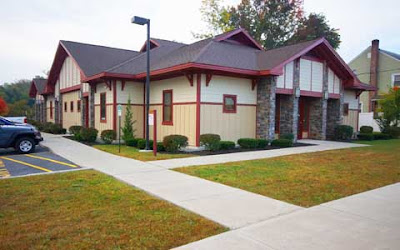 The HHHN center on East Street in Fort Edward, Washington County
Not everyone knows that before he started his long career in medicine he had a published book to his credit. In 1975 Rugge and co-author James West Davidson wrote The Complete Wilderness Paddler, a how-to guide framed around an expedition they had undertaken on Canada's Moisie River. 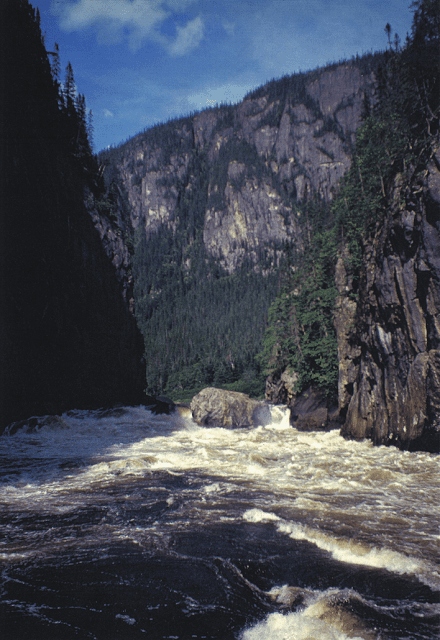 News of the Doctor's retirement took me back many years to when I first read his book and enjoyed a canoeing slide show that Rugge gave in Glens Falls. With this year's paddling season winding down, I reread Wilderness Paddler as well as a second book by the two authors. I can recommend both volumes to anyone who loves a good adventure story and also appreciates the talents a challenging river trip requires. 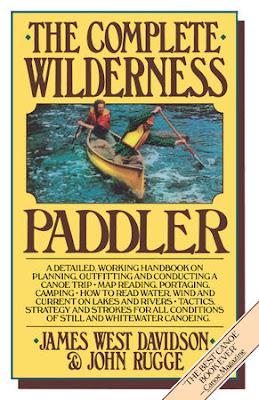 It takes a boat load of skills to tackle a river like the Moisie. Planning, navigation, whitewater paddling, camping and basic survival all come into play. All are covered in the book. The technique of using a real trip for structure works well. There is a narrative arc to hang the instruction onto and the style evokes the camaraderie of friends having the adventure of a lifetime. Also note that Gordon Allen's finely drawn illustrations capture the spirit of the river better than photos could.
Treating patients and building the HHHN must have kept Dr. Rugge busy during the '80's. Still, somehow, he and Davidson found time for more paddling in Labrador. Out of these trips and lots of research came Great Heart. The book was published in 1988 and it too has rivers and canoeing at its core. Great Heart tells the story of three early 1900's expeditions to "the last blank spot on the map of North America". This is history reconstructed from diaries and journals but told with fictional techniques. 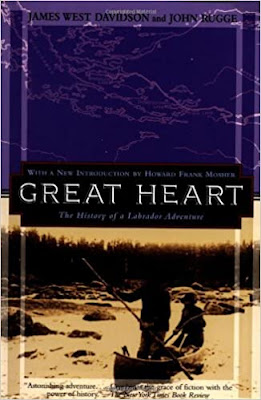 The epic begins with Leonidas Hubbard, a man whose ambitions draw him into an overpowering, unforgiving wilderness that he's  unprepared for. It grows to include his fellow adventurer, Dillon Wallace, his guide, George Elson, and Hubbard's wife Mina. The motivations and personalities of these individuals create a tension that propels the tale. It's an action/adventure thriller but based on actual events. 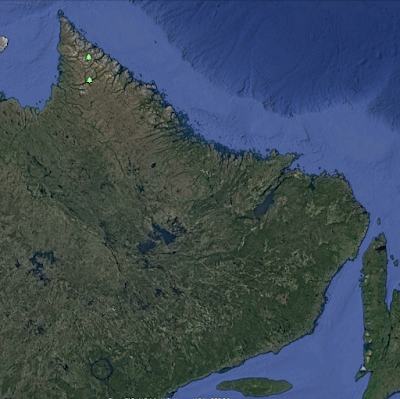 Is another book possible now that he's easing away from his health care responsibilities? We can only hope so. In the meantime, here's wishing John Rugge many years of gentle tailwinds, short portages and a safe eddy at the bottom of every rapid. 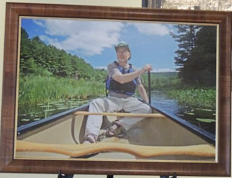 I'll give this to the Banff Mountain Film Festival. For a couple of nights it broke up a routine that was beginning to feel like life without parole. It's these late fall days when it seems to get dark shortly after lunch. Going out in the evening is verboten of course. There's nothing happening anyway and even my traditional escape, a few hours at the library, has been taken away.

So I run laps on our dirt lane or do hill repeats in the fields, both possible after dark with a headlamp, even enjoyable when the stars are out and the local barred owl is hooting. But that only uses up an hour at most and then the only thing left is to settle in by the wood stove to read. OK, not exactly cringe worthy suffering but by eight my eyes start to blur and it just seems so early to go to bed. 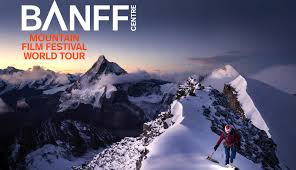 Enter the Banff films. They're only available streamed this year. Normally, after it's November run in the Alberta mountain town, the festival tours to some 305 cities in 20 countries. Locals will remember when Saratoga's Skidmore College hosted the screenings. Then, several years ago, the venue moved north a few miles to SUNY ADK in Queensbury. Credit Mo Coutant and the Glens Falls Chapter of the Adirondack Mountain Club for breathing new life into the event with sold out shows and lots of enthusiasm. It became a real gathering of the tribe. At least until 2020... 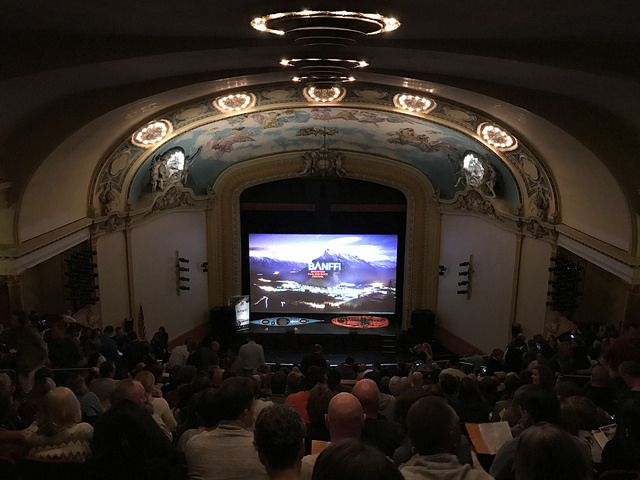 Promo shot of audience enjoying Banff ... definitely not  at ACC

Banff got its start back in 1976. The film and book festival focus's on mountain culture, sports and environment. Other mountain towns - Boulder and Telluride come to mind - have launched similar events but Banff seems to be the granddaddy. When a selection of the films toured they were usually shown over a couple of nights in two separate programs. Streaming uses the same format with the Amber and Onyx programs being available separately or as a bundle. Best to get the combined package as it gives you more days to watch. Also makes sense to order it thru the local ADK chapter because they get some of the proceeds to use for their good work. 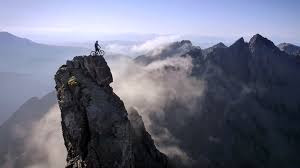 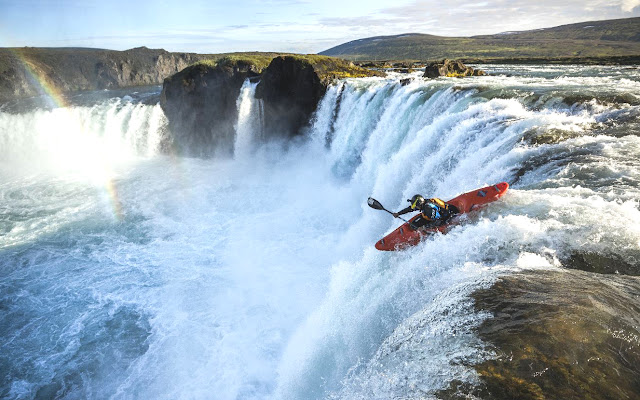 Will Banff appeal to everybody? Well...

There's a lot of whiz-bang mountain biking, skiing and kayaking. Either big fun or death wish ridiculous depending on your point of view. Several climbing films highlight the close relationships fostered by sharing a rope. Nice, but they can also be scary to watch. My favorite was Voice Above Water with its striking images of 90 year old Wayan, a Balinese fisherman who is so disheartened by plastic in the ocean that he's waging a one man clean-up campaign. A perfect blend of beauty, indignation and inspiration.

All images from Banff film festival
Posted by Don Butler at 8:10 PM No comments:

Days of Heaven is a meditative, beautifully shot film by Terrence Malick. In the movie, landscape and sense of place play roles as large as those of Richard Gere and Sam Shepard. And then there is young Linda Manz's plaintive, haunting narration. The images and that voice are hard to forget. 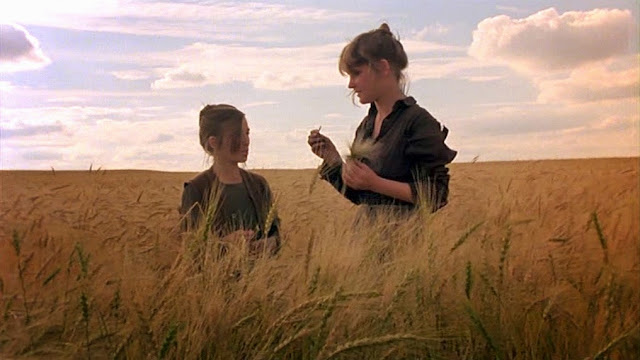 But there can also be rare 'days of heaven' in late November. That's when blue sky, warm sun and gentle breezes surprise and delight. Of course, it's usually otherwise. April may be the cruelest month but November seems to covet the title. There's that raw, cold wind-driven rain. The morning darkness that gives way to gray days that suddenly fade back into more darkness by mid-afternoon. And the woods seem full of gunfire...the intimidating soundtrack of hunting season.

When November is feeling generous, when it gives you a 'day of heaven', best to accept it with gratitude. That's what we did recently, taking advantage of some fine fall weather to bike along the Battenkill. 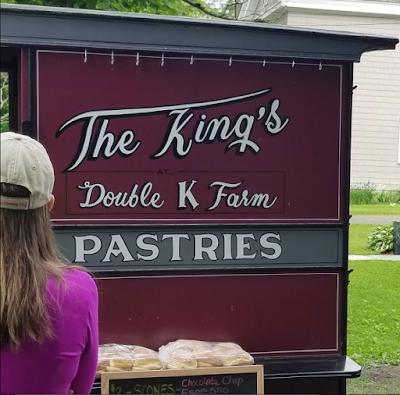 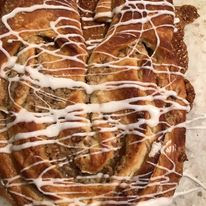 Sunday morning in Cambridge begins with a stop at Kings Donut Cart. With goodies in hand and a thermos of hot coffee it was on to Eagleville for a woodsy picnic and the starting point of our ride. Along Roberson and Hickory Hill roads, both deliciously dirt, then a brief spin on 313 where we snuck into Vermont, slipping by the Covid restrictions sign. 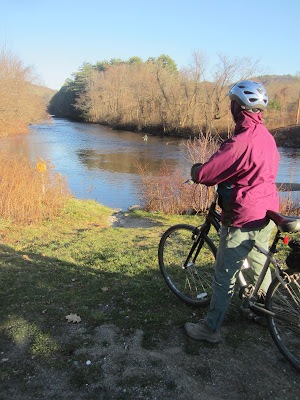 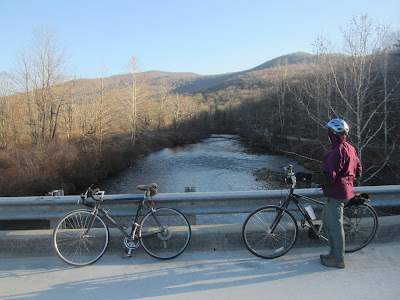 A quick right and we were on River Road. More dirt all the way to West Arlington. The Battenkill close by and mountains all around. A country church, covered bridge and Norman Rockwell's old home. It was a lovely day capped by a rising full moon on the drive home. For the end of November, almost heaven. 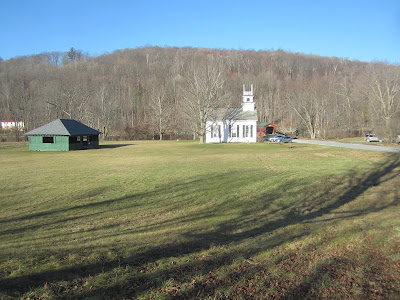 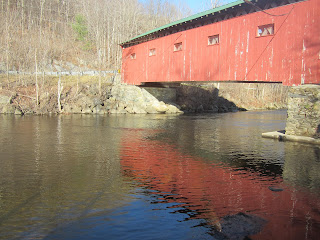 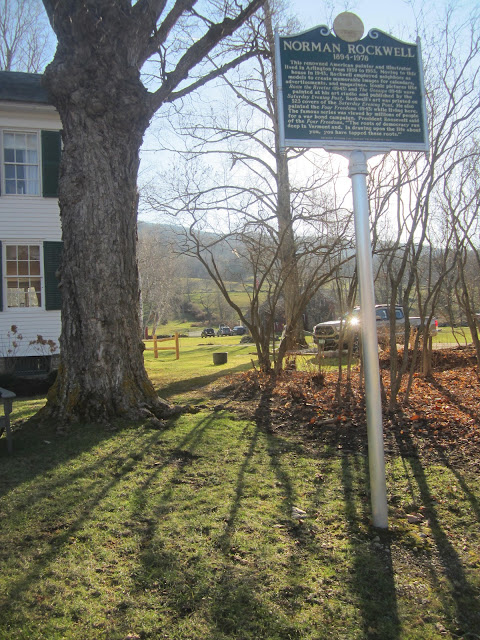 Posted by Don Butler at 7:39 AM No comments: