I went for a walk not too long ago. In front of a white house I found someone's misplaced 'To do' list. It read:

Uh-oh! I kind of like swamps just the way they are. Better get out there and enjoy one right now. Before the emergency draining begins.
That's how one cold winter's afternoon found me wandering around Eldridge Swamp over beyond Cambridge. It had been close to ten below in the morning. That's what I call swamp weather. It's what you need to turn open water and boot-sucking muck into a frozen, walkable surface. To everything there is a season... 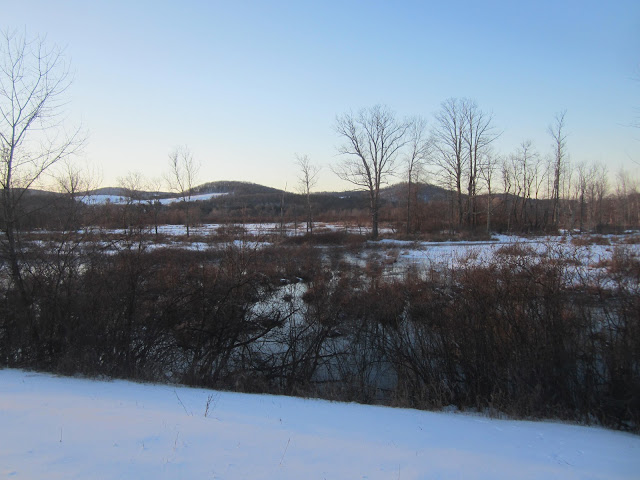 Washington County has lots of swamps but Eldridge is a publicly owned State Forest and it's accessible. That makes it my 'go to'. There would certainly be more to see in summer but also more mosquitos, ticks and mud. Which is not to say that conditions were perfect for my visit. 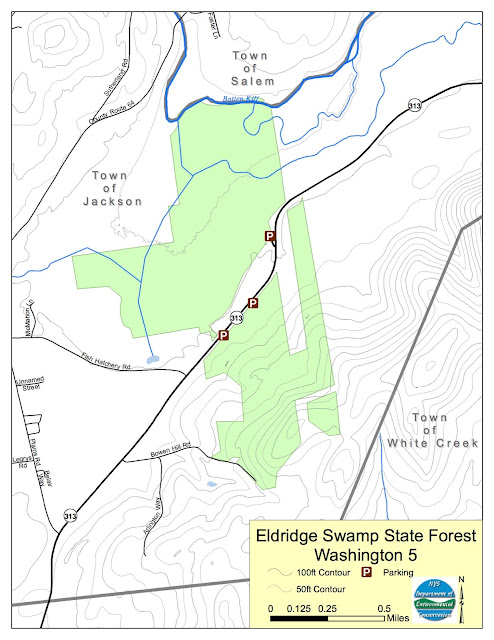 The first challenge was parking. There are three places along Rt. 313 where you can leave your vehicle to access Eldridge. At least there is most of the year. In winter that number can drop to zero. But I was driving a Toyota 4x4 truck and feeling a little cocky, so I plowed thru a small snowbank and skidded down to the summer parking lot. Now snow covered ice is easy enough to go down but what about coming up and out? Too late to worry about that now. Besides, the swamp was waiting. Time to explore.
The walking wasn't all I'd hoped for either. There was a breakable crust with an inch of powder snow on top. It might have been good skiing but maneuverability becomes an issue when you're bushwhacking thru shrubby cover. Snowshoes were another option but they were back home in the garage. I decided to go with just boots and did posthole a bit. It was a little tedious but doable. 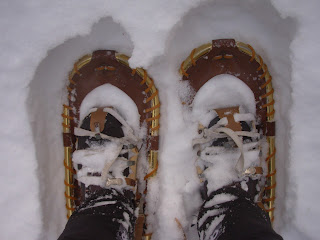 Where are they when you need them?

Even by mid-afternoon it was still frigid. I had intended to do some plant identification, using field guides and taking notes. But that was clearly out of the question. Just taking my gloves off to snap a few photos left my fingers with that tingly feeling. As the saying goes, "It's the next life where everything is perfect." With winter 'swamping' you take what you can get. 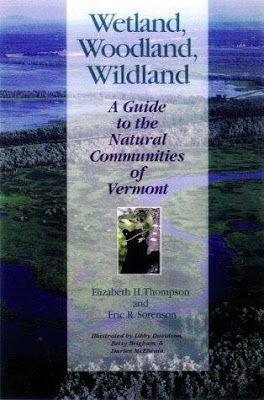 Ecologists divide and subdivide wetlands. In the book    Wetland, Woodland, Wildland - A Guide to the Natural Communities of Vermont they list at least 40 different types.  Water level, vegetation type and position in the landscape differentiate. Eldridge is large enough to have a variety of habitats. Leaving the parking lot I walked across a field that was dry enough to have been farmed in the past. An old logging road then lead into a mixed forest stand of pine, hemlock and hardwoods. It was low and level but didn't seem excessively wet. Then a slight drop of a foot or two  transitioned into more of a scrubby, small tree and shrub habitat with alders, red maple and elm. 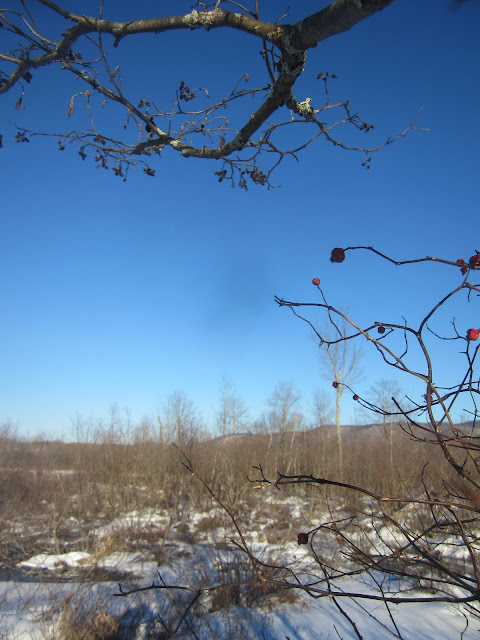 I wandered out thru this brushy area noting various tracks in the snow with rabbit and coyote prevalent. It was open enough to get good views of Snake Ridge, the Shushan hills and the higher mountains of Vermont to the east. The quiet was striking - an almost complete stillness. 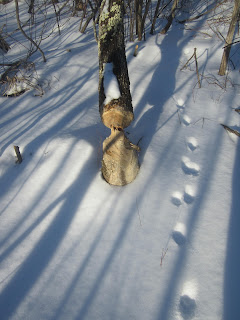 Eventually I could see some open water with what appeared to be a railroad grade on the other side. I believe this was a slough that empties into the Battenkill River but it was now late afternoon of a cold winter's day. Time to turn around and follow my tracks back the way I'd came. 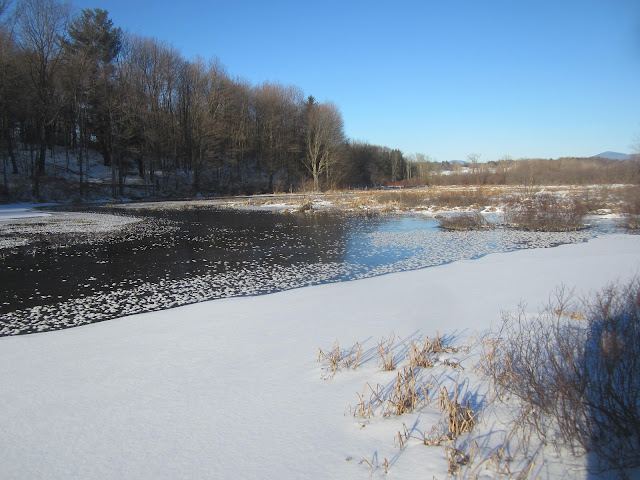 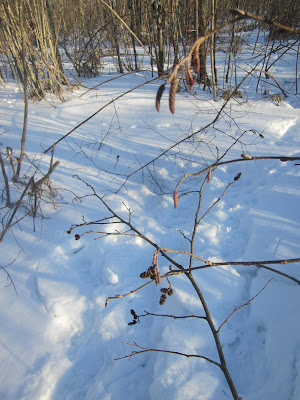 Before leaving I stopped to examine the catkins of an alder. I must have stood too long in one spot. In almost comical slow motion the icy crust gave way and I sunk into water just over the top of my boot. This introduced a small note of urgency to getting back to the truck.  Heading out, I swear I heard a chuckling voice say "I'm a swamp. What did you expect?"
As I retraced my route the only sound was the crunch of boots on snow, with maybe a little sloosh from the water I'd taken on! But then I thought I heard a voice. The voice of the swamp. It was as if the ice had been broken (literally and figuratively) between Eldridge and myself. This place wanted to tell its story if only I would listen. 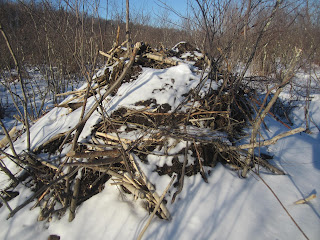 Turns out the swamp had already spoken to better listeners than myself. Geologists, botanists and ecologists have all visited and pieced together a history of the area. Since my winter outing I've been looking into what they've learned. Hopefully I'll get to share some of the swamp's story in a future post. 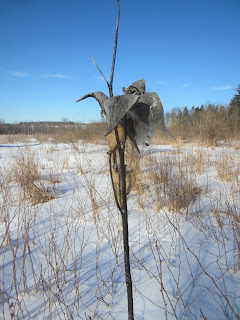 Kame deposits form steep banks on the south side of Eldridge. From the S bend on Rt. 313 an old farm lane drops down the slope to an overgrown field. This is now used as access to the section of State Forest between 313 and the Battenkill. It works fine in summer, not so good in winter. 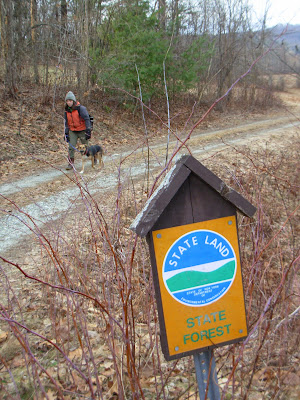 The access lane from a previous 'no problem' visit

Exercise caution before driving down here when conditions are 'iffy'. I wish I had. When it was time to come out all I could do was put her in four-wheel drive, get a running start and aim for the top of the snowy/icy hill. First, the truck fishtailed towards a deep ditch that separates the lane from the highway. That was good for a little shot of adrenaline. Thankfully it straightened but then began to lose traction. Just when things were beginning to look dire one wheel pushed thru the snowbank at the top and caught dry pavement. Out we popped and before reaching Cambridge merciful heat was blowing on my needy toes. All's well that ends warm...