Roam v. Responsibility.
Sounds like a landmark Supreme Court case. Who knows, maybe some day it will be. But for the time being we each get to hand down the decision on how to spend our time. The urge to wander is part of our DNA. It's what lead us out of Africa to explore Earth's every nook and cranny. We are roamers by nature. But we're rather soft, fragile roamers in a world that can be uncomfortable, hard, dangerous. Seeking security (and a little cush), we've built homes, roads, electric grids. We've banded together in nations with governments, economies, safety nets. And taxes. Lots and lots of taxes. In shouldering the yoke of responsibility, our roaming instincts have been neglected. 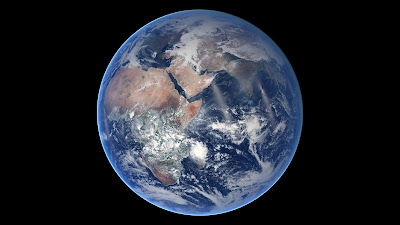 Our home to roam

I'm a prime example. I care for crops and animals. That's my small contribution to society. In theory, this should provide some degree of material well-being for myself and my family (although it doesn't always work out that way!). But the non-stop responsibilities of farming severely limits my ability to travel. Still, the desire to see what lies beyond the next hill persists. My inner roamer may be down, but he's not out. Maybe that's why every clear evening finds me outside, looking up. No matter how much our obligations anchor us, we can always make a little time to lift our gaze and let it drift thru the night sky.
It's been a good summer for viewing planets, with four bright ones visible in the early evening. Driven by innate curiosity - that roaming thing again! -  people have sent missions to all of them. This post is a look at what we've found.
First, let's locate them in the sky. Start by looking for a bright 'star' low in the southwest shortly after sunset. That's Venus, soon to be lost in the Sun's glare. Next up and a little higher is Jupiter. Moving left you'll find Saturn almost due south as the sky darkens. Finally, unmistakable red/orange Mars is in the southeast. Earth and the other planets are all in motion and this creates a constantly changing skyscape.
Get your bearings at This Week's Sky at a Glance. 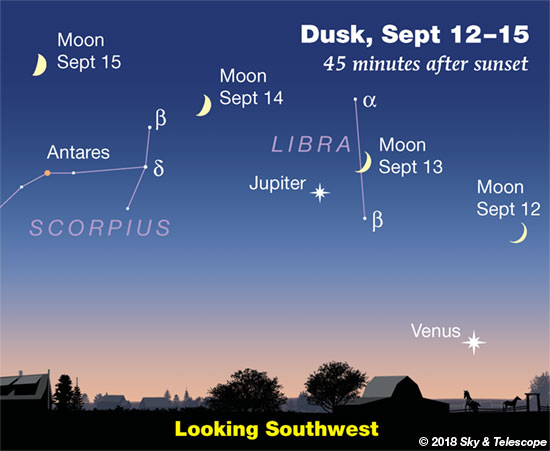 Note that I haven't mentioned Mercury, Uranus or Neptune. They are fascinating places and we've sent missions to each of them but they are not easily visible to the casual skywatcher. And then there is Pluto. Remember tiny, distant Pluto? It's been kicked out of the planet club altogether.

"I wouldn't want to belong to a club that would have me as a member."
- Groucho Marx 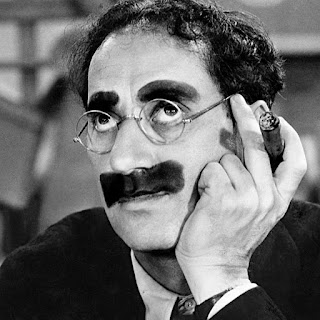 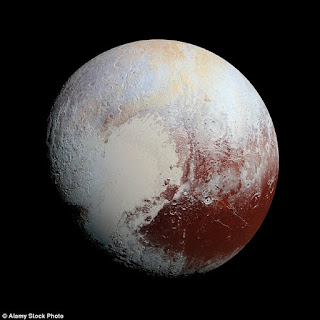 Groucho and Pluto: Worlds unto themselves
Web images

You might think of Venus as Earth's 'hot' little sister. In many ways the planets are like siblings. They are similar in size and both are rocky with a core, mantle, crust and atmosphere. But, like most siblings, there are differences. Venus's day is 243 of our days which is longer than its year of 225 Earth days. It doesn't have a moon and there's no view in or out because it's completely cloaked in clouds of sulfuric acid. The surface temperature is 900 degrees F and the air pressure is 90 times that of Earth. Hot and heavy.

Scientists say Venus has a runaway greenhouse effect caused by carbon dioxide in the atmosphere that has trapped solar heat. Fortunately, we don't have to worry about that here on Earth. President Trump has assured us that global warming is fake news.
Obviously, Venus isn't going to be a popular vacation spot anytime soon. Still, we've been trying to visit since the early 60's. The Soviets sent over 30 missions to the planet. Many never made it. Others landed and (surprise!) melted shortly thereafter. A few survived long enough to send back data and photos from the surface. NASA has sent orbiters that use radar to peer thru the clouds and map the terrain below. Currently, Japan's Akatsuki space craft is orbiting the planet. Because there is no water and it's clearly uninhabitable, Venus hasn't seen a lot of missions lately. Some scientists think that is unfortunate. They believe there is much to learn here and would like to go back soon.

If Mars gets any busier it may need a traffic cop. We've sent many missions to the Red Planet and more are planned. Currently there are six craft orbiting and two rovers on the surface. Another lander heads up this year and four more are scheduled for 2020. Mars is the easiest planet to explore, although 'easy' is a relative term in spaceflight. It's the only planet humans may stand on in the foreseeable future. The present focus is for signs of past life and for water.

Mars is a cold desert often wracked by planet encircling dust storms. It's smaller than Earth with much less gravity, not much of a magnetic field and a thin atmosphere. It has two tiny moons that look like lumpy potatoes whizzing close and fast around the planet. Frozen water and carbon dioxide create white polar ice caps but most of surface has a reddish hue from iron-rich dust. 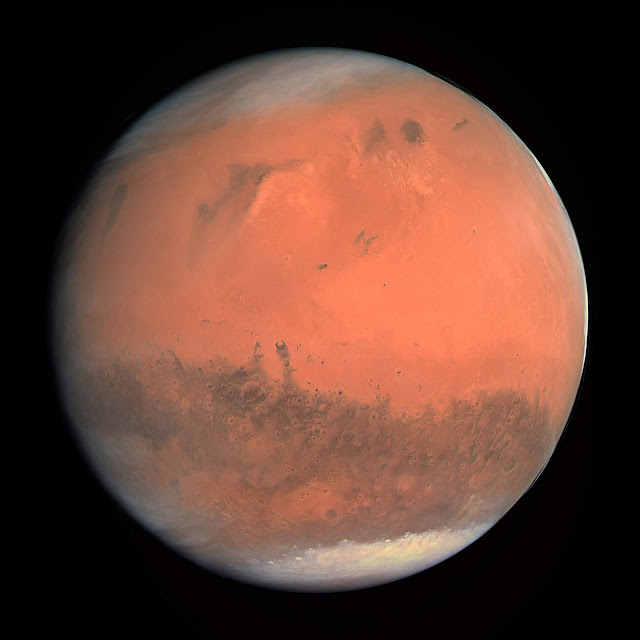 Jupiter has an entourage fit for a celestial god. Seventy-nine  moons (and counting) as well as a faint ring system. Many of the moons are tiny but the four Galileans are big and bright enough to be seen with binoculars. 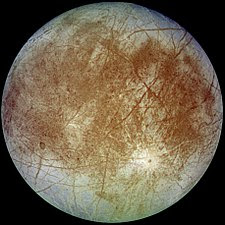 Europa - one of Jupiter's moons

Jupiter is what's called a 'gas giant' - a huge ball of hydrogen and helium. These are the same elements that make up the Sun. I've heard Jupiter called a 'failed star', meaning it doesn't have enough mass and gravity to create the interior temperatures and pressures to ignite fusion. Consider that the Sun contains 98 percent of all the matter in the solar system while Jupiter has most of the rest. Giant or runt becomes a matter of what you're compared to.
The planet rotates on its axis once every ten hours (a day) and the visible cloud tops form colored bands that move in opposite directions to each other. Wind speeds can be up to 250 mph and persistent storms twice as big as the Earth (the Great Red Spot) have been tracked for centuries. 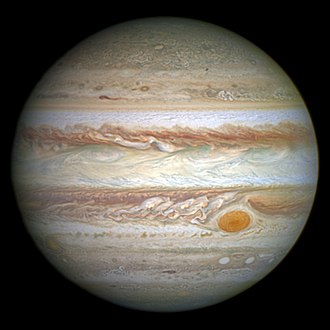 Nine spacecraft have visited Jupiter. Most were flyby's using the planets immense gravity to slingshot them further out into the distant solar system. Galileo spent eight years orbiting from the mid '90's on and currently Juno is circling and sending back data. On September 15, 2017 Saturn swallowed Cassini without so much as a burp. That's the way you roll when you're a gas giant. After a nearly twenty year long mission NASA let Cassini orbit one last time before plunging the craft into Saturn's deep atmosphere. During its tenure Cassini had sent a probe to the surface of the moon Titan, captured striking images of other moons and investigated the planet's weather systems and ring structure. 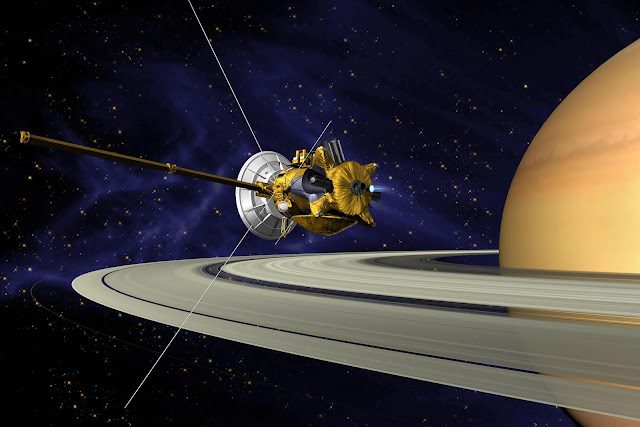 Saturn has a composition similar to Jupiter's but it is smaller, less dense and almost twice as far from the Sun. It would float in water, presuming you could find enough water. Cold ammonia-ice clouds give it a creamy, placid appearance but beneath are immense storms with high winds and powerful lightning. The poles have frequent aurorae and there is an odd hexagonal cloud sitting above the northern polar region. There are over sixty moons but at some point the distinction between moonlets and large chunks of the ring system begins to blur. 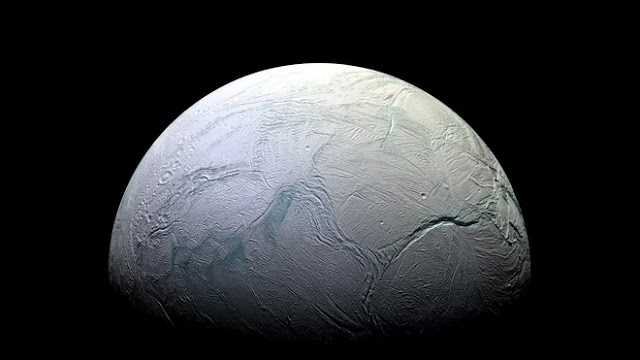 Enceladus - one of Saturn's many moons
Ah, those rings! Think of Saturn and you picture its rings.They consist of water ice ranging from chunks as big as a house to tiny crystalline shards. Seen in close-up they differentiate into hundreds of concentric ringlets, all orbiting in a narrow plane above the planet's equator. While the structure extends many tens of thousands of miles beyond Saturn, it is remarkably thin. In some places only yards deep, they are still easily visible (and beautiful) when seen thru a small telescope. 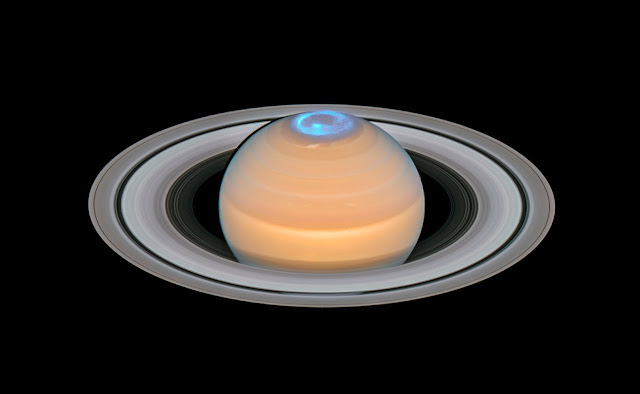 I got to spend a pleasant late summer evening paddling the Hudson River at South Glens Falls recently. Tried out Licia's new Hornbeck canoe - seventeen pounds of lightweight fun! We saw ducks in the inlets, stopped at the Sandbar beach and then leisurely circled back across from Havilands Cove. The water was a still, mirrowed sheet reflecting a few lavender clouds at sunset. Folks were strolling the Betar Walkway, sitting by the shore and out on kayaks and paddleboards.
After taking out we lingered on the grassy bank enjoying beer and munchies (thanks to Licia!). As the sky darkened I spotted Venus twinkling between the trees on the Glens Falls side. Above was the crescent Moon, Jupiter, Saturn and Mars - nature's own string of chile lights hanging over the river. Maybe the beer had something to do with it, but a deep sense of belonging came over me. We have been given this amazing world. We are so lucky. Who but the B 52's? This post's theme song has to be their 1989 hit. Here's a link to their zany Youtube video should you be inclined to Roam with them. 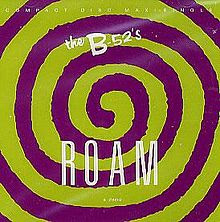 Posted by Don Butler at 9:40 PM No comments: