When even monks say they look like breasts, who am I to argue? But that, of course, has absolutely nothing to do with my desire to check them out. Two Tops are a pair of low hills that rise above the New Skete Monastery. Located east of Cambridge, near the Vermont border, they are part of the rumpled topographic disorder called the Taconics.
I wouldn't really call them a landmark like, say, Mt. Equinox. They're not even as high as neighboring Goose Egg Ridge or the peaks of Chestnut Woods. But shape and symmetry do make them recognizable from various points in southeastern Washington County. And the fact that the monks have built publicly accessible trails on them adds to their allure. 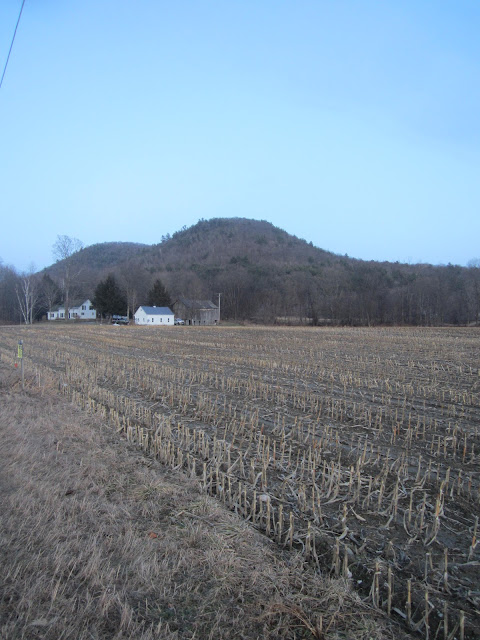 On a recent day between the holidays I had to go to Greenwich for tractor parts (a fuel pump). After a quick stop at NAPA I decided to keep going. To Cambridge, then Ash Grove and part way up New Skete Lane before parking in a small lot across the road from the Emmaus House. This is the lower trailhead for the marked paths on Two Tops, with another access point located in back of the Monastery buildings further up. 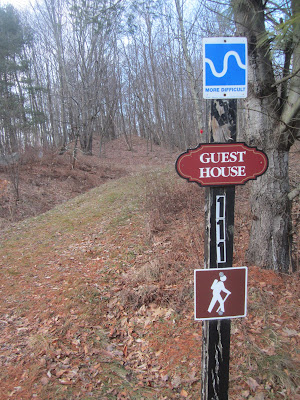 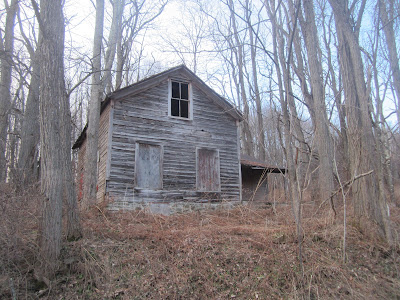 A post marks the beginning of the trail which swings in back of an abandoned farmhouse nestled in a locust grove. There are stone walls and 'wolf' trees, older and larger than their neighbors. These are all signs that the wooded slopes were once cleared and probably grazed by sheep. I always think of Tom Wessels' Reading the Forested Landscape when hiking here. 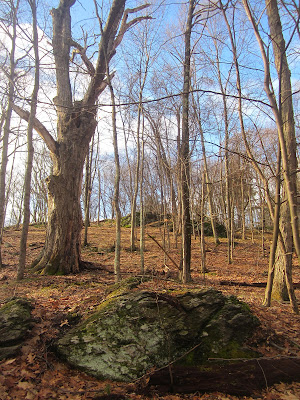 You walk on a wide woods road for aways before the route narrows to wind up thru open forest. It is very well marked with arrows on the trees pointing the way. I noticed some sugar maple, beech and hickory but the predominant trees were red and chestnut oaks. Abundant acorns should make this productive wildlife habitat. I saw a few gray squirrels scurrying about and lots of deer droppings. I would also expect turkeys and the border area is known for bear and bobcat. 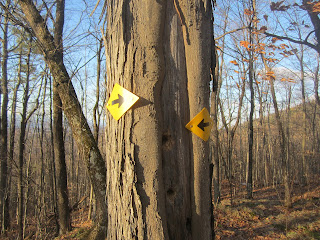 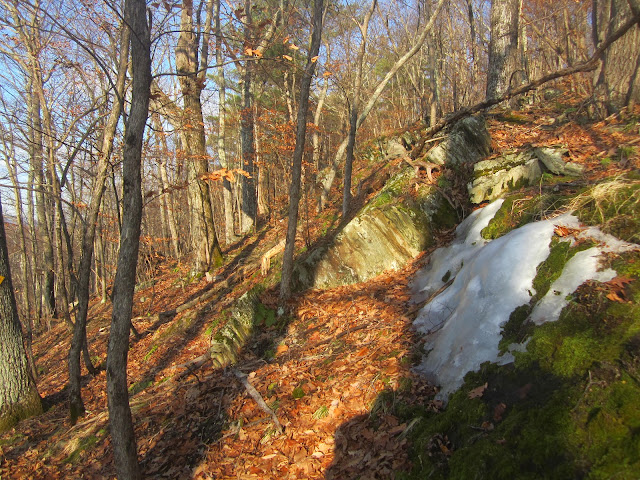 Taconic slopes are steep an Two Tops is no exception. The trail does its best to find a way up, skirting ledges and switching back before reaching a level summit area. It's hard to tell where the actual high point is but when you see a contorted outcrop of phyllite you'll be close. There is no grand vista but if you wander off trail a bit to the right you can find a small opening with a view to the south. 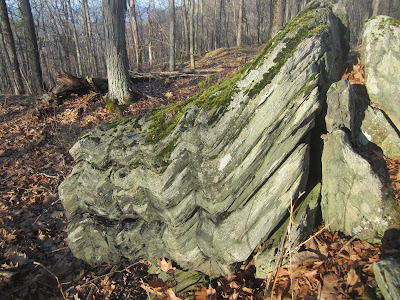 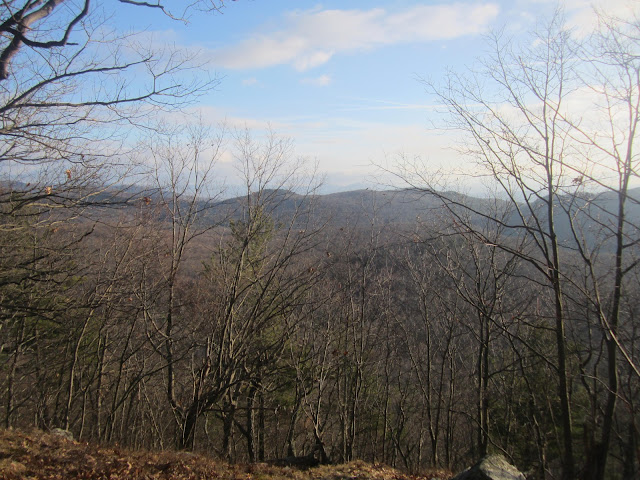 It's not called Two Tops without reason. From the trail you can see another hill rising to the left. It's a little above you so I call that one Hi Top (1740')  while I refer to the one the path traverses as Lo Top (1661'). The summits are cleaved by a small valley that holds several vernal pools. These tiny ponds are ideal places for amphibians to breed in the spring. They drain into a small rivulet that drops down thru the monastery, paralleling the entrance drive and eventually crossing under Chestnut Hill Road before flowing into Pumpkin Hook Creek, which in turn merges with White Creek. 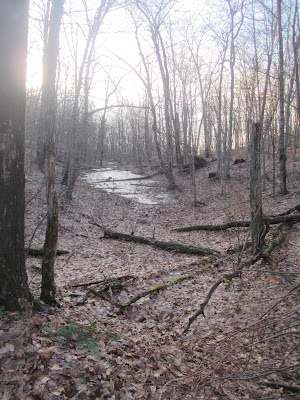 Between Two Tops - a vernal pool

It's as if James Bond ordered a "stirred if not shaken" landscape to go along with his "shaken not stirred" martini. There is a jumble of hills and ridges that rise almost 1000' above the valley floor. The phyllite bedrock formed from near horizontal deposits of seafloor mud a half billion years ago. Over time the mud hardened before being caught in the jaws of converging tectonic plates. Heat and pressure metamorphosed it and in a somewhat softened, plastic state, it bent and folded. Hot fluids circulated thru cracks, depositing mineral veins. Then, over hundreds of millions of years the rock cooled and was eroded by water and ice. Today the phyllite has a greenish-gray silvery sheen, the result of flat lying mica crystals. It's a pretty rock, especially on freshly exposed surfaces and in places it is folded almost like an accordion. Milky white chunks of quartz, remnants of the mineral veins, are also common. 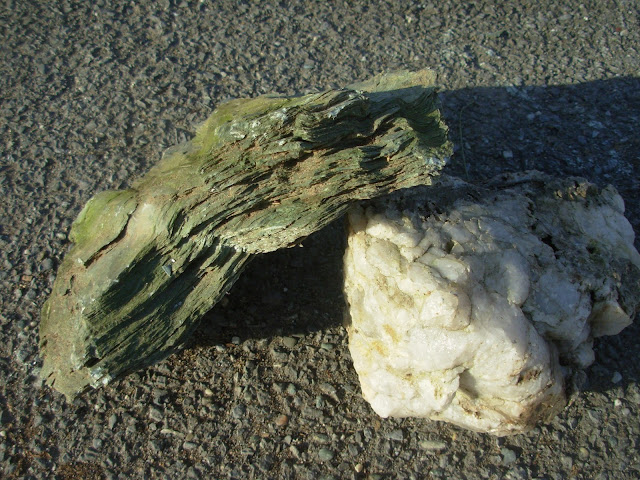 
The descent from Lo Top has a surreal feel. After the stillness of the winter woods you begin to hear dogs barking. Lots of dogs barking. The Monks main source of income is the raising and training of dogs and their lively banter echoes off the mountain as you approach the monastery. Then, when the leaves are off, you begin to get glimpses of golden domes and crosses. It feels like you're floating down from the heavens toward earth with New Skete there to welcome you. 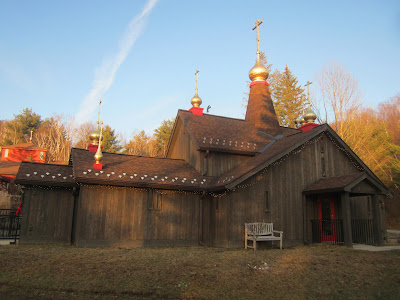 You come out of the woods into an open area behind the buildings. A lane leads in back of the Church of Holy Wisdom where a ledge reveals more of the twisted and fractured bedrock. Before heading down the road to your car take a minute to enjoy the serenity of the landscaped grounds and the architecture of the churches. Let the belltower draw your gaze up to the verdant slopes of Two Tops and reflect on how man and nature can exist in perfect harmony. 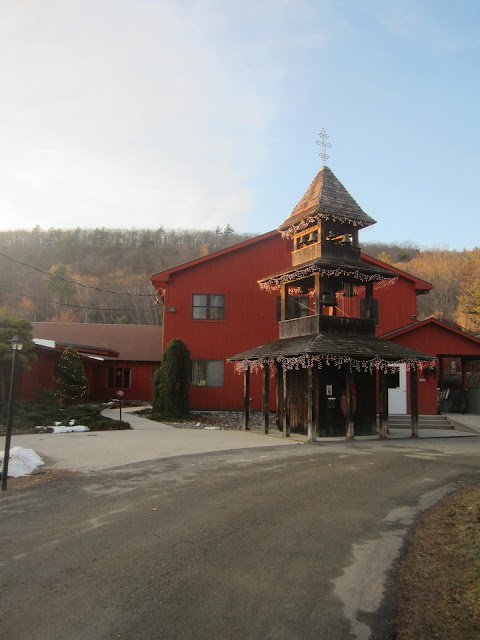 THE NEWS FROM NEW SKETE...

As I was leaving I met a man walking two German Shepherds. It's one thing to know that the dogs are well trained, it's another to have a couple of big, burly beasts coming straight at you. I stood statue still and was rewarded with a good sniffing and friendly nuzzles from the Shepherds and a pleasant greeting from the Brother. The encounter lead me to imagine what it would be like to live here. That's what Jesse Itzler did and he wrote a book about the experience that you might find interesting.
After his 2015 bestseller, Living with a Seal, Itzler had a hard act to follow. That book chronicled his 31 days training with 'the toughest man on the planet'. It's in the memoir / personal growth genre, both funny and inspiring. The individual known as 'Seal' is admirable, outrageous and scary. All at the same time. Never identified beyond that simple moniker, it is generally assumed that he is David Goggins, a man with an almost unbelievable backstory that you can read in his autobiography, Can't Hurt Me. 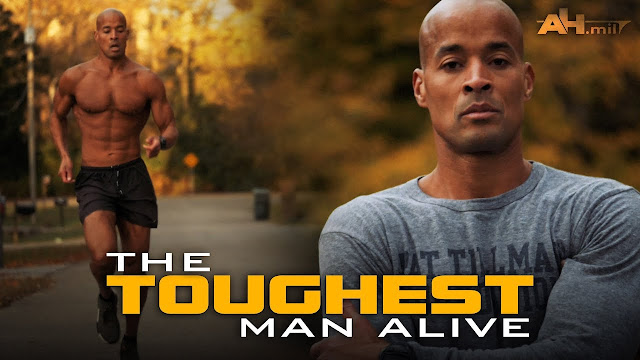 I've handed off my title to David Goggins - web image

In 2017 Itzler was feeling a little out of control. With a wife and four kids, several businesses and a constant bombardment of calls, texts and E-mails, he needed a break. Time to move to a monastery. Not quite ready for the commitment required by Thich Nhat Hanh's Plum Village in France, Itzler opts for a couple of weeks at New Skete. Living with the Monks is his diary of that experience. It's a light, entertaining read filled with pop philosophy (highlighted in bold type to make sure you get it) and just the right amount of irreverence. The Monks and Nuns come across as a little 'different' but wise and very likable. For locals, an added bonus is seeing the area thru an outsiders eyes. 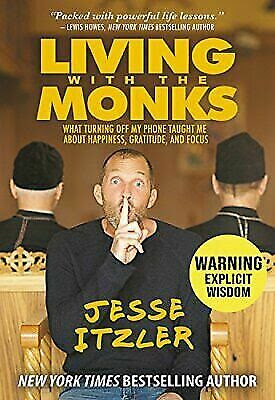 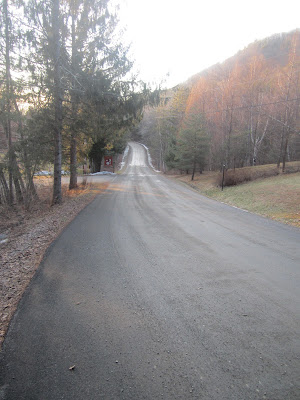 At the top of the driveway

As I walked back to my truck I was literally following in Jesse Itzler's footsteps. He was afraid to go into the woods because of bears so he walked the driveway for exercise, figuring six times up and down was about 10 miles. For those, like myself, who find meditation in movement there are a number of options here. There is the network of trails with many of them being easier than the one over Two Tops. And the driveway would be a great place for runners to get in a hard winter's workout. It's a wide soft gravel road with light traffic and a steady, but not too steep uphill grade. For the aspiring 'David Goggins hardpeople' among us, you could bike or run from Cambridge Village, then up the drive and around the trails for a tough workout. Just be prepared to stop at dog checkpoints! 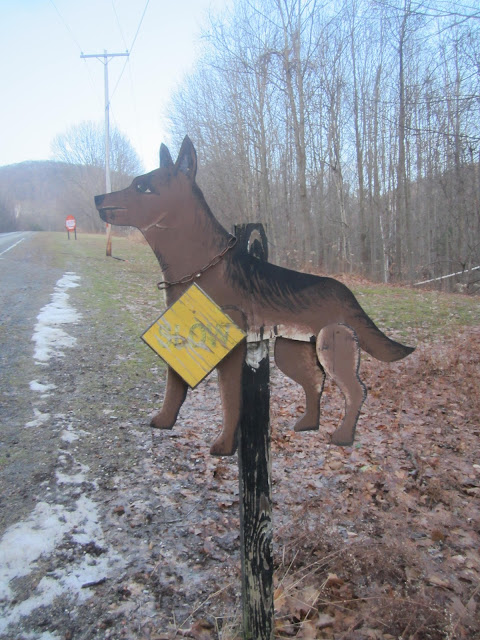 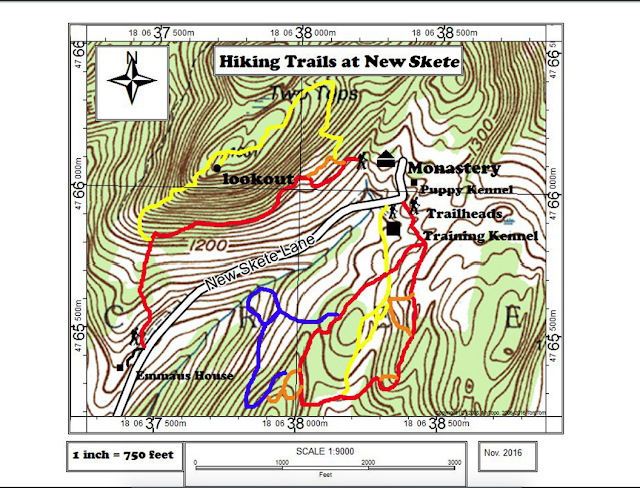 * Remember: The trails at New Skete are open to the public but it's a good idea to check with one of the Brothers before using them. Their website has more information and for those intrigued by the place I would recommend reading In the Spirit of Happiness by the Monks. 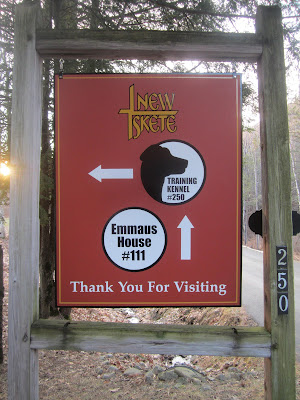