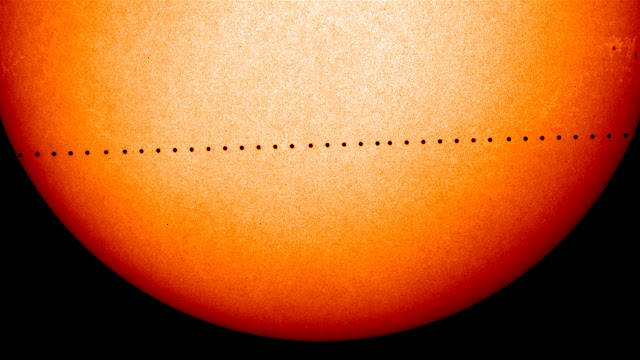 Monday, May 9 is Mercury's moment in the Sun, both literally and figuratively. From 7:12 am till 2:42 pm the tiny planet can be seen as a black spot on the solar disk. This is called a transit. Only Mercury and Venus can be seen to cross the Sun from Earth. When the Moon does this it is called a solar eclipse. It's an amazing coincidence that the Sun and Moon as seen from Earth are the same size in the sky. This allows the Moon to completely block the Sun when the alignment is just right - two to five times per year from a narrow band on Earth.
Transits of Mercury and Venus don't happen as often. The next one for Mercury is in 2019. Venus had a pair of transits in 2004 and 2012 but the next one won't happen until 2117. I hope to be able to retire by then and have time to watch it. Maybe someday soon colonists on Mars will be able to see an Earth transit.
Mercury is the smallest and innermost of the solar systems eight planets. Remember that Pluto has been demoted and a distant ninth planet has been theorized but not yet found. Mercury orbits the Sun every 88 days while its "day" is 59 Earth days long. The surface of Mercury looks remarkably like our Moon. It's off white and heavily cratered with the side facing the Sun searingly hot and the dark side frigid. 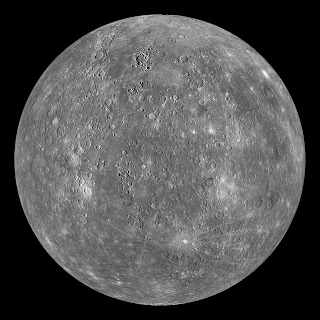 The planet is not easy to observe. It's always fairly close to the Sun and only visible for a short time in either dusk or dawn. It often rises or sets within an hour of the Sun. There were good views about a month ago in the evening sky and I managed to spot it on several occasions. In June you may be able to glimpse it in the east before sunrise. That or you can watch as it shows its back side to us during Monday's transit.
Obviously you NEVER look directly at the Sun. To see the transit you will need a properly filtered telescope - something most of us don't have. Alternately, you could try to project an image of the Sun and the tiny black dot of Mercury thru binoculars onto a sheet of white paper. If nothing else, you may set the paper ablaze! Probably the best option is to view the transit online at NASA's website. That should make both your ophthalmologist and the local fire department happy.

~ For another way to view the transit check here.
~ Check out a video of the transit from NASA here.
Posted by Don Butler at 9:20 PM 1 comment: