It's one of life's little mysteries ... you have to look down to have your spirits uplifted by spring wildflowers. Many are low and almost hidden in the forest floor. So I've been looking down a lot the last month and it has given me memories that soar. Big patches of wild ginger and blue cohosh side by side. White, yellow and lavender violets sprinkled together like a Monet. Wood anemone and rue anemone chummy enough to see their similarities and their differences side by side. Trilliums on a hillside and marsh marigolds in the seep at hills bottom.

This is where you'd expect a gallery of gorgeous wildflower photos. Well, I'm sorry but that's not what you're going to get. Not with my cheap little point and shoot. Better to go to the 'Flower Lady's' blog  where you will find crisp images of all kinds of natural beauty and knowledgable commentary as well. Instead I'd like to share a few 'looking up' shots. Most of these were taken by others. Maybe that's why they're so good. 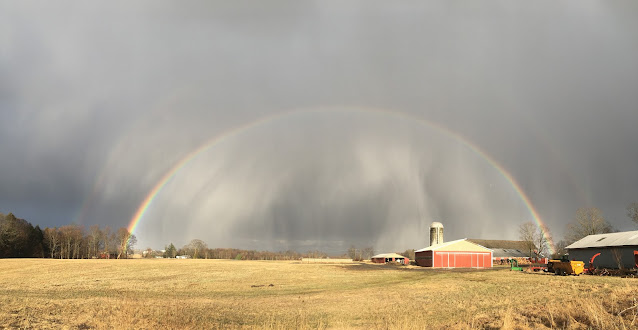 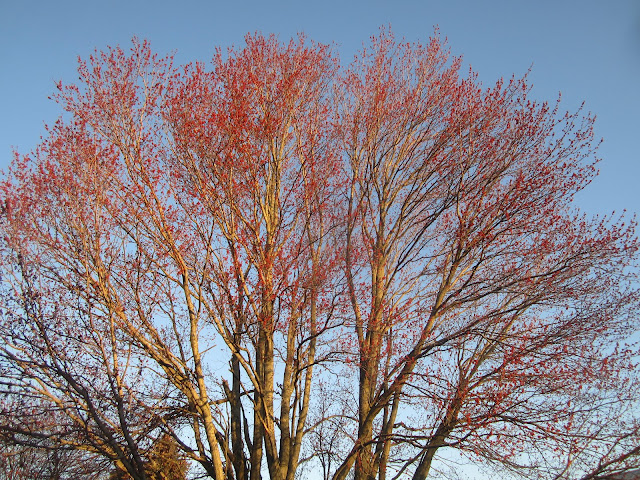 A little later in the season red maple flowers against a blue sky
As spring progressed Tom caught these lil' hooters looking out on the world from their cosy nest hole in a maple tree. 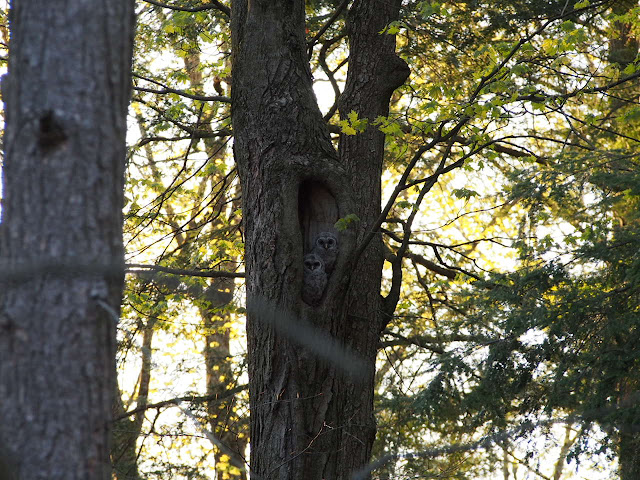 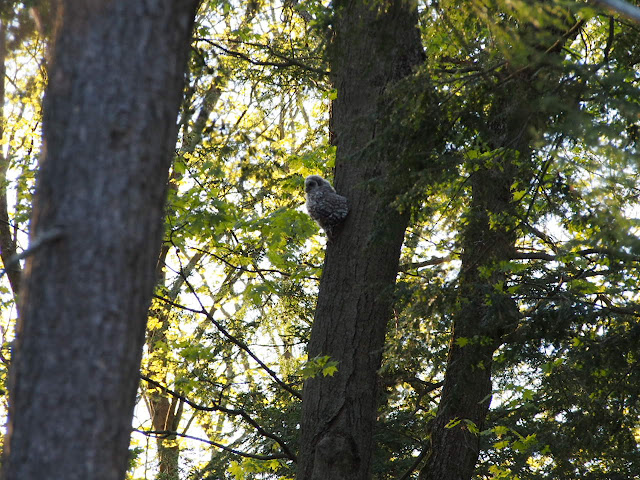 Getting brave, starting to explore 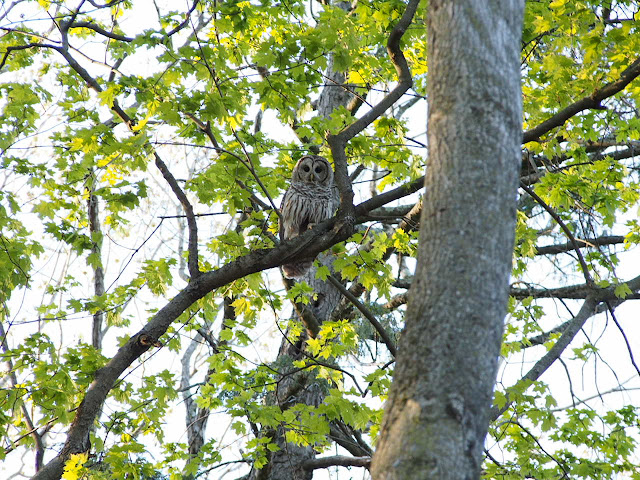 Mama Barred Owl keeping a wary eye on photographer Tom Ferris
And there has also been a nice show in the early morning sky as four planets duck and weave around each other. I don't have a camera that can capture the Venus, Jupiter, Mars, Saturn dance but others do so here's a link to a gallery of photos you might enjoy. You don't even have to get up before dawn to see them!
Posted by Don Butler at 10:04 PM No comments:

Maybe someday I'll take up permanent residence in Evergreen Cemetery. Just not right now. Not anytime soon. No sense rushing into these things.

In the meantime it'll be occasional visits. It's a fascinating place. Rewarding to the naturalist, the historian, to anyone who appreciates monuments in all their myriad shapes and quirky inscriptions. In anticipation of Memorial Day I spent a few hours there recently. In this post I'ld like to share a little of what I saw. 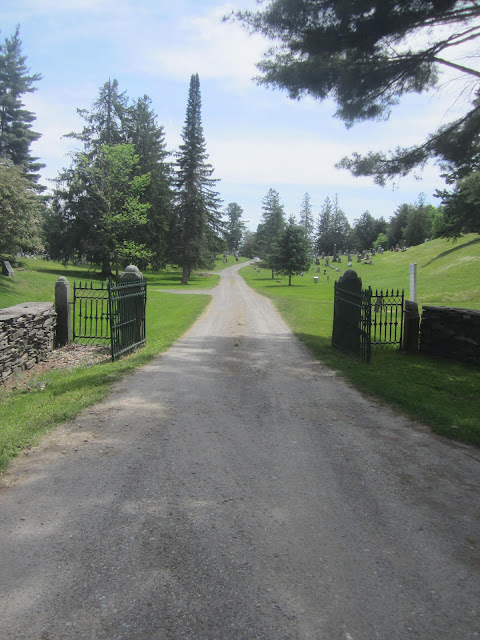 First, some orientation. There are a lot of Evergreen Cemetery's out there but the one of which I speak is located on Cemetery Road a mile or two outside the Village of Salem in Washington County, N.Y. The site of the village and much of the surrounding area is level to gently rolling outwash deposits left by the melting of the last glacier. But on either side of these bottom lands Taconic slopes rise up to 400 feet above the valley floor. One of these ridges, Cary Hill, sits at the western edge of Salem and Evergreen Cemetery is located on a low knoll at its southern end. 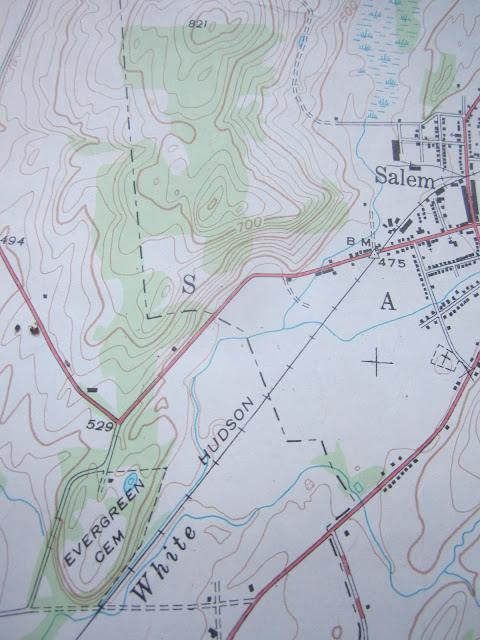 Tilted, layered mudstone bedrock outcrops on the western side of Evergreen's knoll but it dips down toward the east and is covered with enough deep silty-shaley soil to make digging graves possible. The cemetery features a small pond ringed with cattails and yellow iris's and home to an even smaller island, the domain of a solitary spruce tree. At a low point near the entrance there is a hand pump which hints that the water table is probably less than 20 feet down. On its eastern side White Creek skirts the Evergreen knoll but it's down a steep, wooded bank and not easily accessible. 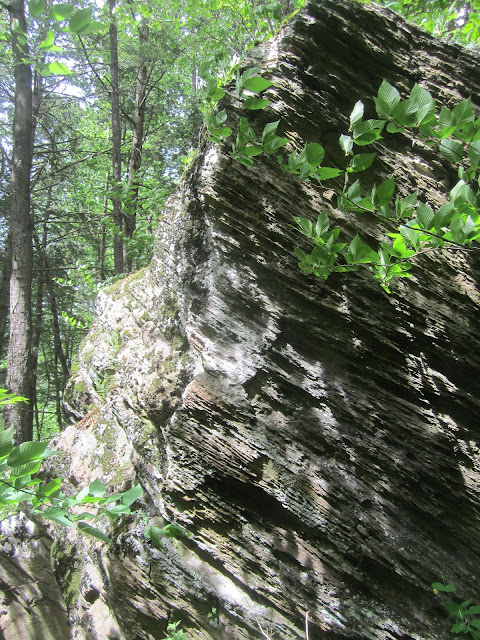 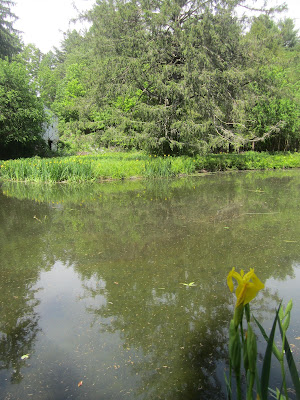 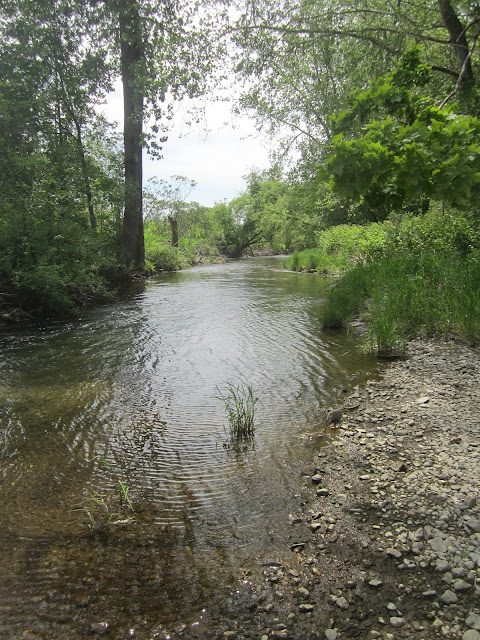 Evergreen certainly lives up to its name, being the home of just about every type of conifer you're likely to see around here. Cedars and yews, spruces and hemlocks, tamaracks and several types of pine are scattered thru out the grounds. You'll also see deciduous trees of impressive size and, because some of the plots are accessed by woodland paths, wandering here can feel like a nature hike. Wildflowers are everywhere with white and lavender ones (phlox?) in colorful bloom on the day I visited. Mossy stone walls, most likely dating from when this was a sheep pasture, add to the charm. 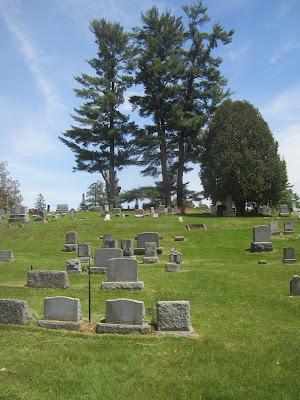 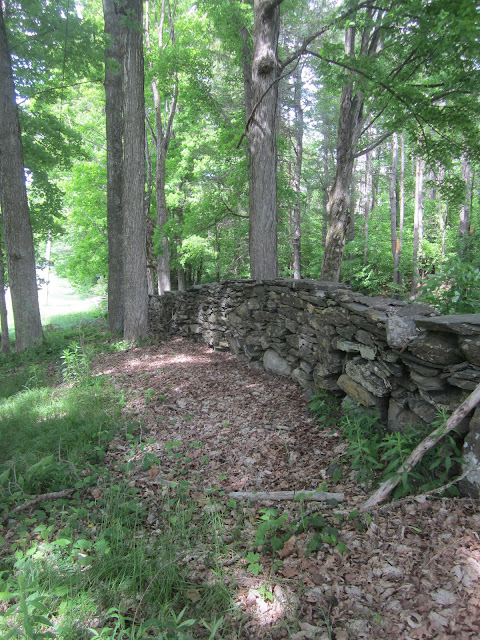 My feeling is that every gravestone commemorates a precious life with stories to tell and accomplishments to celebrate. The problem is that unless you are family or friend to the departed there is no way of knowing the particulars of that life. That said, there are several people interred here whose lives are well documented.
Brigadier General David Allen Russell was a Salem native who graduated from West Point and participated in many campaigns before being killed leading his men in battle. A large granite block at the far end of the cemetery sits over his grave. Look for the Civil War monument surrounded by markers of the fallen from that sad time. 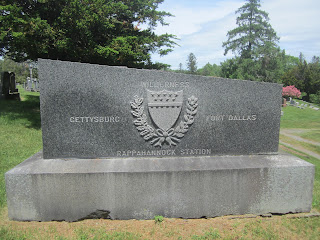 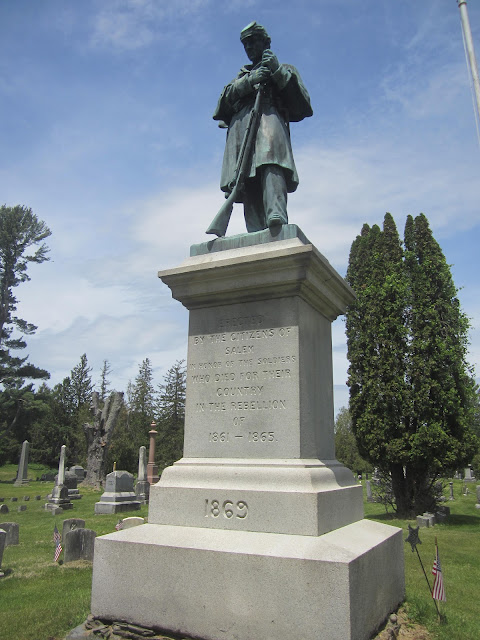 Francis Clark was decorated for his bravery fighting the Nazis in World War II. He received the Medal of Honor from President Harry Truman for repeatedly facing enemy fire to help save his fellow soldiers. At one point he was wounded but refused evacuation and continued to fight. Back in Salem after the war he continued to serve his community until his death in 1981. A simple stone and two bronze plaques on the eastern side of the cemetery pay tribute to this humble hero. 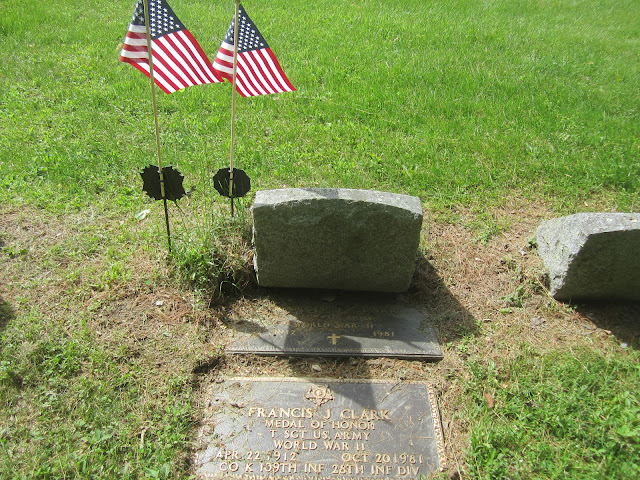 In a section to the west of the Civil War monument is a large memorial to the Fitch family. There were multiple generations of distinguished individuals but probably the best known was Asa Fitch Jr. He was a medical doctor, an historian and a scientist sometimes called the father of American entomology. His family home still stands a short distance away at Fitch Point near where Black Creek flows into the Battenkill. 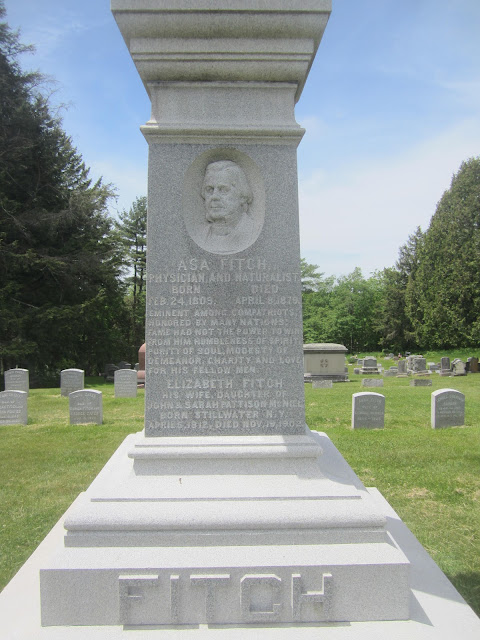 Others buried here are more notorious than revered. Volunteers working in the cemetery told me the story of 'Old Head Allen'. He was  local doctor involved in a scandalous affair of grave robbing and beheading! Shades of Frankenstein right here in Salem.
And then there are those who are all but forgotten. Walking down a wooded lane on the eastern side leads to separate sections where people of color, the poor and those with no local connection were once interred. Places to contemplate our complex social and cultural history. 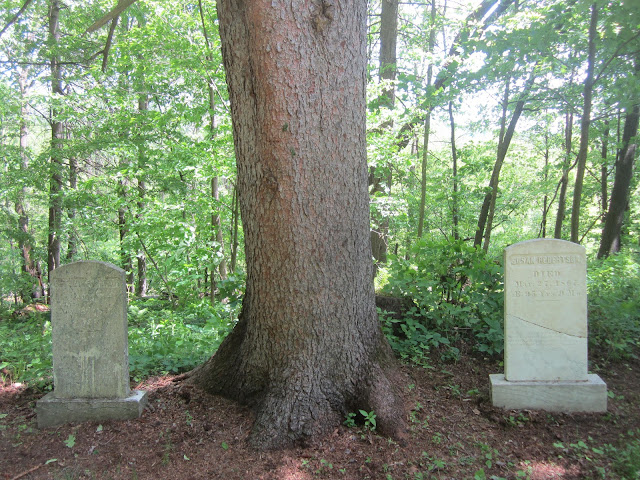 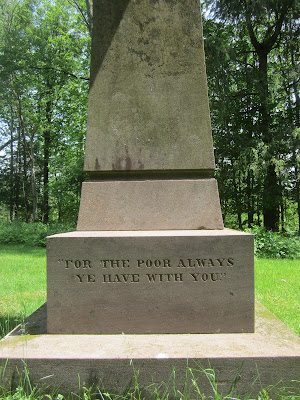 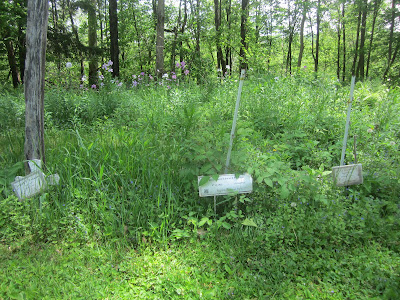 These are troubling times. Our rights, our freedoms, our very lives seem under attach. Remembering the trials of those who came before us can keep things in perspective. Everything we cherish and take for granted is owed to their sacrifice.
AN EVERGREEN GALLEY... 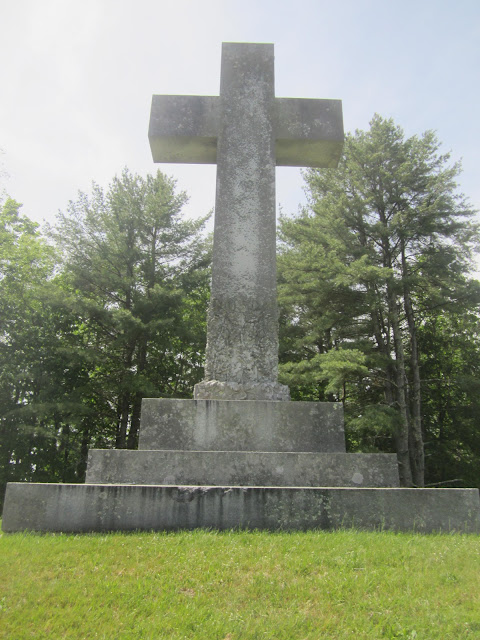 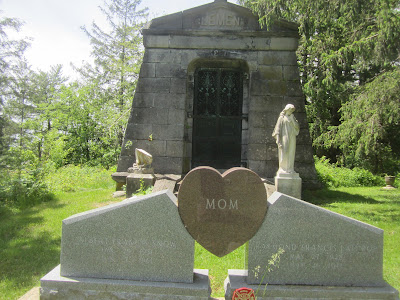 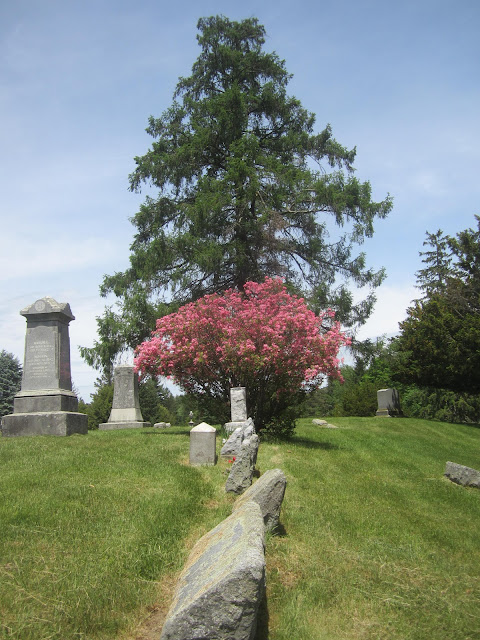 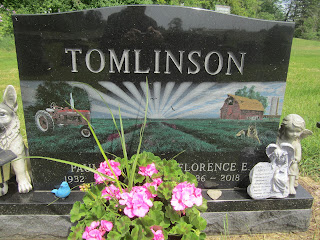 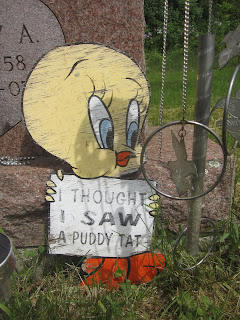 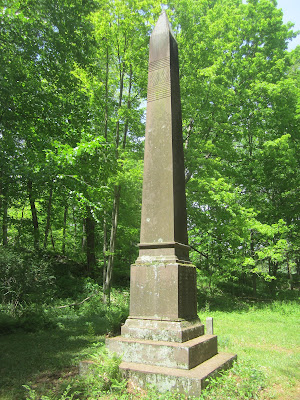 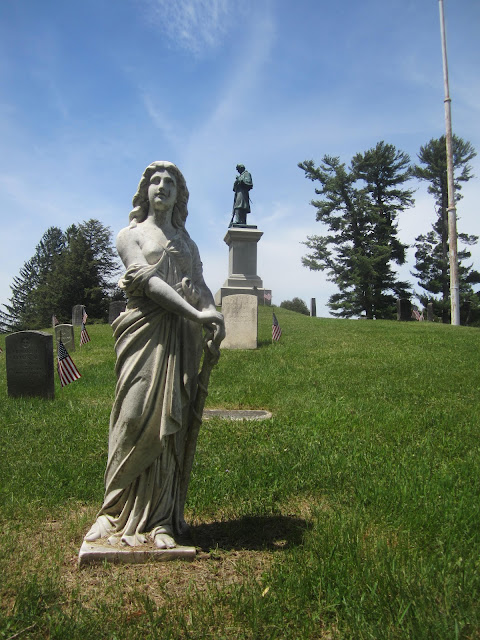 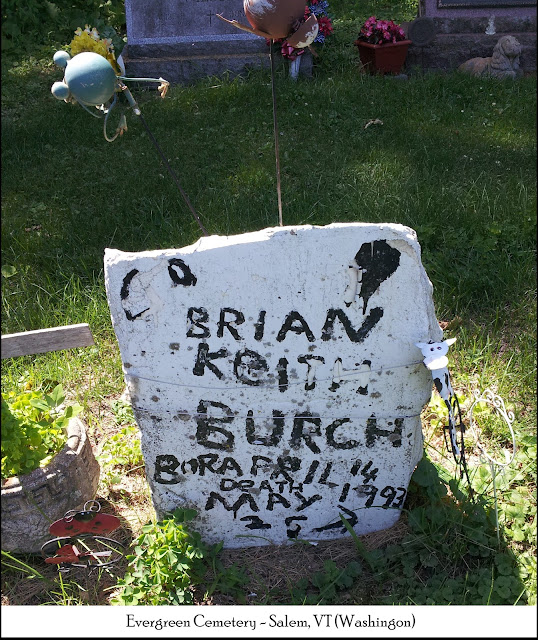