A dark night. A knock on the door.

So begins a ghost story that stretches from the Highlands of Scotland to a cemetery in Washington County.

Duncan Campbell opens the door of his tower house on the banks of the River Awe to find a desperate man with blood besmirched clothes.  The midnight visitor pleads for shelter. He claims men are pursuing him with evil intent. "Swear on your dirk that you will protect me," he implores. Such is the code of conduct in the 18th century Highlands of Scotland that Campbell must pledge to harbor this unwelcome guest and reluctantly guides him to a hidden room for the night. 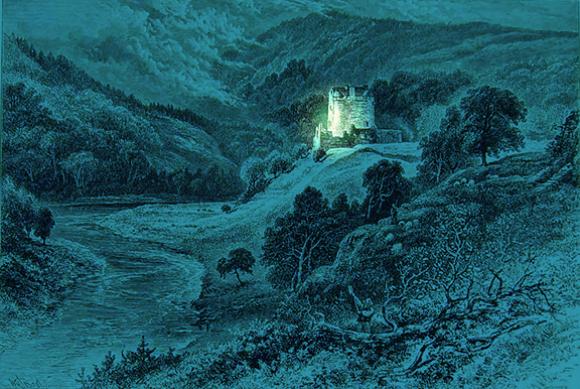 Inverawe House - Scotland
web image
A few minutes later comes a second knock and Campbell is confronted by a group who tell of a heinous murder. Donald Campbell, his clansman, has been cut down in an ambush and robbery. Had Duncan seen anyone suspicious?
Talk about being caught between a rock and a hard place. The Highlander stood pinned between his oath to harbor the fugitive and wanting justice for his slain cousin. The honor of his word won the moment and he told the men he had seen no one. But later that night, as Campbell tossed in troubled sleep, he had another visitor. Donald's ghost stood by his bedside and intoned, "Inverawe! Inverawe! blood has been shed. Shield not the murderer!"
In the morning Duncan settled on an uneasy compromise. He lead the man out of his house and up the wild slopes of Ben Cruachan. There he hid the scoundrel in a cave and felt he had satisfied his oath. But the following night the ghost returned to beseech, "Inverawe! Inverawe! blood has been shed. Blood must avenge blood." 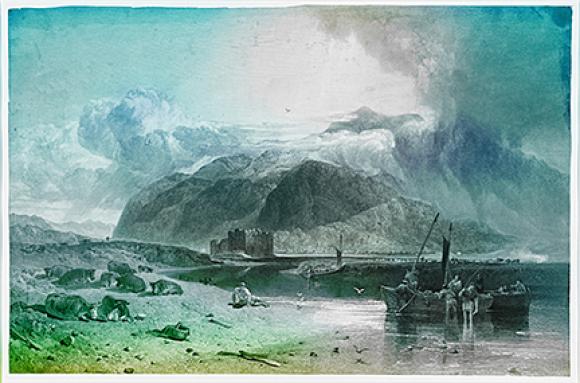 Ben Cruachan - Scotland
web image
The following day, feeling no longer bound by oath and under heavy obligation to Donald, Duncan went to the cave intent on avenging the murder. But the villain was gone leaving him no recourse but to return to his castle on the River Awe where his sleep was disturbed yet a third time by the ghostly apparition. But this time the words were different and perplexing, "Farewell Inverawe! Farewell, till we meet at TICONDEROGA!"
Neither Campbell nor anyone else in Scotland had ever heard of Ticonderoga but the name stuck in his mind roiling and agitating. Then, in 1758, he found himself in America, a Major in the fabled Black Watch regiment of soldiers fighting with the English against the French for the control of a continent. In early July of that summer the Black Watch embarked down Lake George from the ruins of Fort William Henry, members of a huge army under the command of Major General James Abercromby. Their objective was to attack the French at Fort Carillon (now Fort Ticonderoga) on the shore of Lake Champlain. 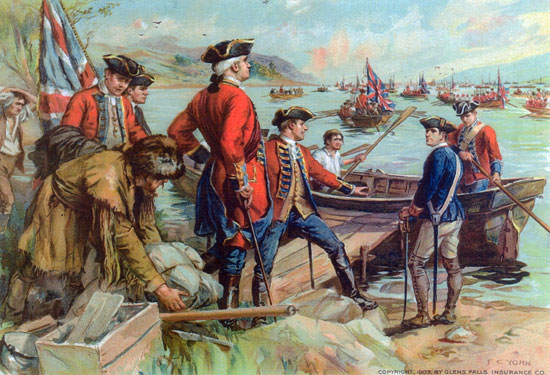 Upon reaching the north end of the lake the plan began to unravel. Field commander Lord Howe was killed in an early skirmish and Abercromby then hesitated allowing the French time to build a formidable breastworks in front of the fort. Meanwhile, Duncan Campbell heard others speak of the looming attack on 'Ticonderoga' and that word filled him with apprehension. A final visitation by his cousins ghost followed and by the time the British moved against the French, Campbell knew his end was near. 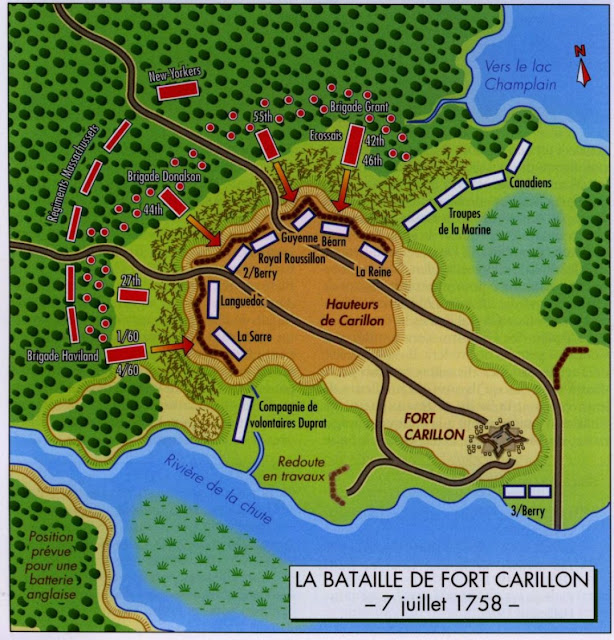 The provincials, British regulars and particularly the Black Watch showed great bravery but the cards (and trees) were stacked against them. From their lines behind a wall of fallen logs the French were able to target the exposed open field position of their enemy. By the time Abercromby finally called off the futile charge nearly 2000 of his troops were killed or wounded. Among them were both Duncan Campbell, shot in the arm, and his son Alexander, also with an arm injury.

The Black Watch at Ticonderoga
web image
The horror of the battlefield was followed by the horror of retreat. In disarray the soldiers had to find their way back thru dark woods to their boats and then row some thirty miles back to the head of the lake. From there it was a rough overland trek to Fort Edward where a crude hospital on Rogers Island awaited. With neither anesthesia nor antibiotics one can only imagine the pain and suffering of the wounded. Duncan Campbell had his arm amputated but to no avail, he died on the island July 17, 1758. His son fared little better, making it back to Scotland where he died of his war injuries. The ghost's dire warning about 'TICONDEROGA' had come to pass. 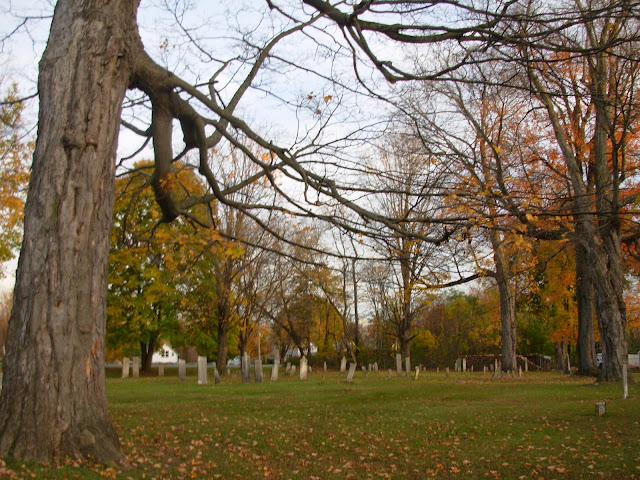 State Street Cemetery in Fort Edward
Campbell's body was laid to rest in what is now Fort Edward's State Street Cemetery. But it was not to be undisturbed rest. In 1871 he was exhumed by Walter and James Gilchrist for the purpose of reburial in Union Cemetery several miles away. The Gilchrists, out of macabre curiosity, opened the coffin to see what old Duncan looked like after all those years. They were surprised to find a body that appeared almost freshly buried, but perhaps more surprised when after a few minutes of exposure to air the corpse turned to dust before their eyes. 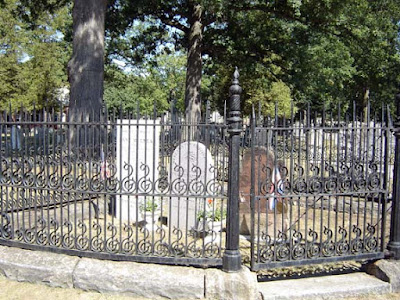 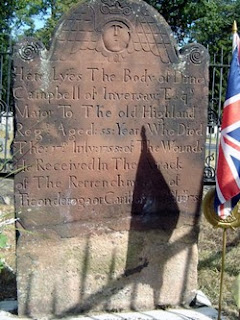 Even after subsequent internment the saga wasn't over. Due to vandalism of his grave Campbell was dug up again around 1927 and now lies in an enclosure that also contains the remains of Jane McCrea and Sara McNeil. To add one last bizarre twist to the story, McCrea, who was also moved several times, was exhumed yet again in 2003 when it was found that her skull was missing, apparently taken by souvenir hunters at an earlier reburial. Who needs haunted house attractions when you have local history like ours?
IN CAMPBELL'S FOOTSTEPS...
It's possible to visit all the places mentioned above. Heading to Scotland sometime soon? Why not swing by Inverawe House. I believe it has gone out of the Campbell clan's ownership and is now known for it's smoked fish and meat! It's not to be confused with nearby Inverary Castle which also has its share of ghosts. While in the Highlands you can climb Ben Cruachan being careful to avoid any hideaway caves. 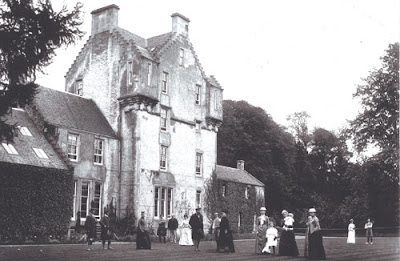 Back in the States you can visit Fort William Henry and the Lake George Battleground Park, both located at the south end of the lake with lots of interpretive material. This is where Abercromby assembled his 15000 strong army and built the bateauxs and whaleboats to transport his troops north. At the far end of the lake, Fort Ticonderoga is a major attraction where you can walk the battlefield that Campbell fought on. The Black Watch are still revered here with the local library named after them and a memorial  on the fort grounds. 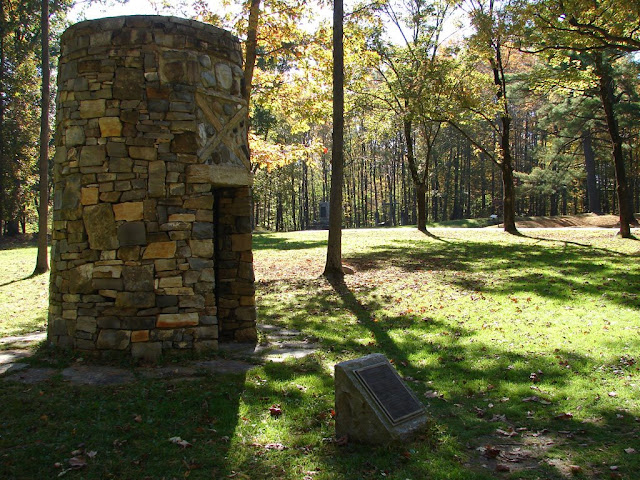 In Washington County you can stroll on Rogers Island where the hospital that Campbell spent his last days in was located. There's also a visitors center with exhibits on the islands military history. The State Street Cemetery is located in Fort Edward Village and Union Cemetery is a few miles up Rt. 4 across from the Washington County DMV and offices. 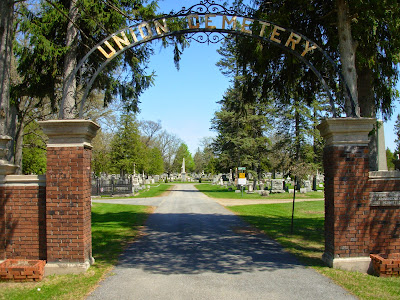 Two other sources that you might want to check out are Frederick B. Richards' The Black Watch at Ticonderoga and Major Duncan Campbell of Inverawe and Robert Louis Stevenson's famous telling of the Campbell tale Ticonderoga. Both are best read on dark stormy nights. Just hope no one knocks on the door while you're engrossed in Duncan Campbell's world.
Posted by Don Butler at 6:57 PM