Kane if you're Able

The industrialized world has given the Inuit climate change, a bitter gift disrupting ways of life honed over the millennia. The Inuit, in turn, have given us kayaks. I sometimes wonder who got the worst end of the deal.
Not that I don't love to paddle. Fifty years on the water has given me many great memories. All of them from the seat of a canoe. But a while back a kayak craze swept the land. And I got washed along in the madness. Bought a fire engine red Eddyline sea kayak. A sleek, narrow sixteen footer that looks like it's doing ninety just sitting still.
And sitting still is pretty much what it's done since I got it. Once you are on the water the kayak is wonderfully fast and efficient. But there's the catch. The cockpit is so small and narrow that you have to be poured in. And getting back out? There have been times when I truly thought that kayak was going to be my final resting place.
So, like many other things, I have a bad attitude about kayaks. Then, wouldn't you know it, some good friends gave us a kayak! A little Perception Swifty that they no longer used. With a big, open cockpit - easy to get into and semi-possible to get out of -
Lil' Swifty has turned out to be a blessing. 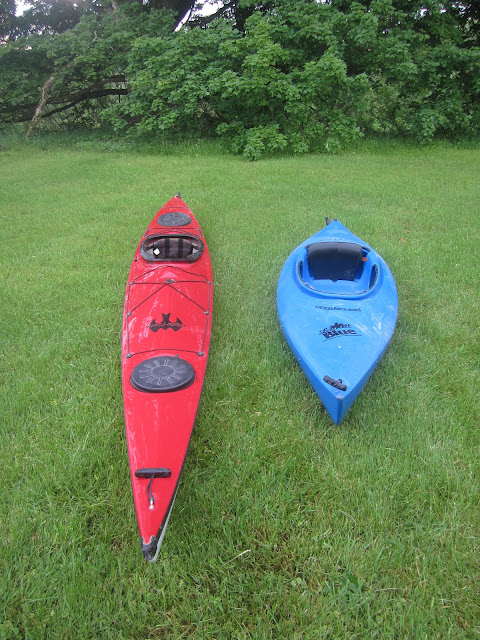 The Laurel and Hardy of kayaks

We had been doing less and less paddling. As gravity has gotten stronger with each passing year, lifting our sixty pound Bell up onto the roof rack proved increasingly difficult. And tandem canoes aren't called 'divorce boats' without reason. Despite the expert skills and engaging conversation I provided from the stern, Gwenne wanted her own craft. Solo independence. Women's liberation. 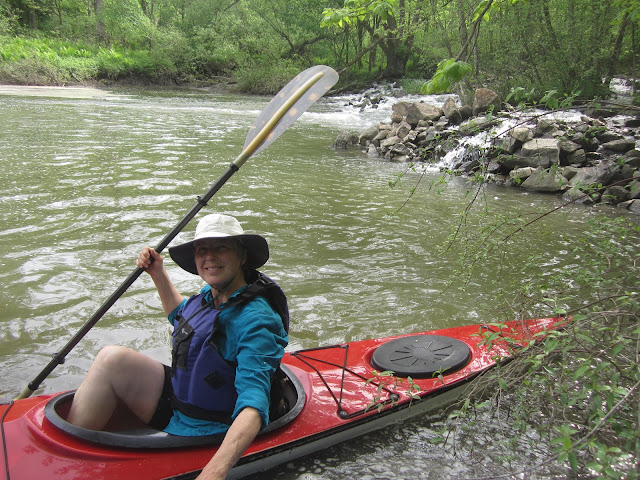 So now we can get on the water together/alone. She fits in the Eddyline Nighthawk and I in the Swifty. That arrangement paved the way for a recent trip that you might find interesting.
It begins in the Village of Fort Ann. From the Rt. 4 traffic light turn onto Clay Hill Road. Immediately after crossing the railroad tracks and before the bridge you'll see a pocket park on the left. It's an attractive spot with easy access to the canal. Paddle north, away from the bridge, and in a short distance look for a stream flowing into the canal on the left. This is Halfway Creek. Before the canal was built this spot marked the confluence of Wood and Halfway Creeks. From here their combined flow went north to Lake Champlain, then on to the St. Lawrence and eventually the Atlantic. Note that the water here always looks muddy, a legacy of the clays that settled to the bottom of glacial Lake Albany 13,000 years ago. 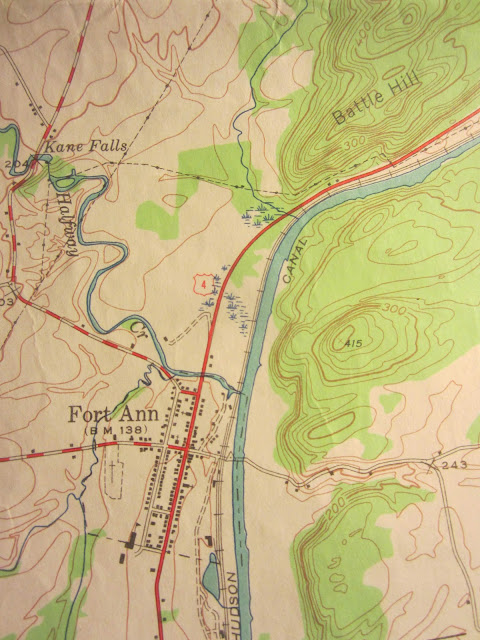 The mouth of Halfway Creek is a good place to get your bearings. This is the Hudson-Champlain lowlands floored by sandstone, limestone and shale bedrock. But the low hill rising directly across the canal from Halfway Creek consists of much older metamorphic gneiss that has pushed up thru the sedimentary layers. It is the most easterly exposure of Adirondack 'basement' rock and from this 415 foot hill a ridge rises steadily to the north reaching 1920 feet at the summit of Vanderburg Mountain before dropping back down to the East Bay of Lake Champlain.  Sometimes called the Fort Ann mountains, this is a tilted block of the Earth's crust that has pivoted up along the Welch Hollow Fault on its west side.
Halfway Creek rises in the Luzerne Mountains ( a sub-range of the Adirondacks) to the west of Glens Falls. It flows thru the city but instead of joining the nearby Hudson River it heads northeast and enters Washington County, just grazing the corner of the Town of Kingsbury at Pattens Mills, before lazily meandering across the Town of Fort Ann.
The area the stream flows thru is rich in glacial landforms. Moraines, deltas, kettles, eskers and drumlins, indeed, almost every type of melting ice deposit imaginable, are common in the Halfway Creek watershed. Late in the glacial epoch Fort Ann was the major spillway for Lake Vermont, a large precursor of Lake Champlain. 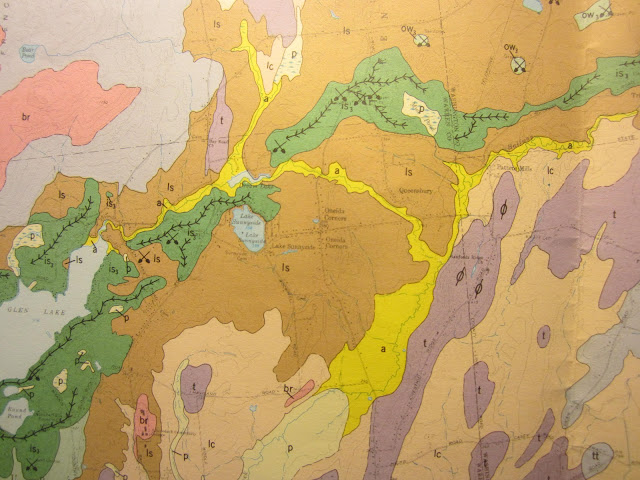 Wood Creek had long been used as a travel corridor by Native Americans. With the arrival of Europeans the lowlands became the pathway of armies and the site of battles. First the French and English and then the English and the American colonists had skirmishes here. Indians took sides and were drawn into the conflicts as well. Just north of Fort Ann is Battle Hill where, on July 8,1777, the British and the Americans had a fierce engagement. It is currently being developed as a park to commemorate that event.
Forts have been built (and destroyed) on the south side of Halfway Creek since the 1690's. Today the site hosts a bank branch built to look like a fort! I doubt if any of the earlier iterations had a drive-thru... 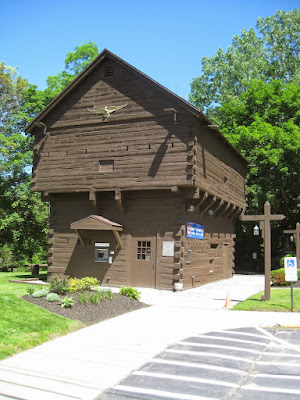 As you leave the canal and paddle up the Creek the first thing you encounter is a railroad bridge. Rail service began in the mid-1800's and trains used to stop at a station here. Today, freight and Amtrak passenger traffic pass thru but don't stop in Fort Ann. 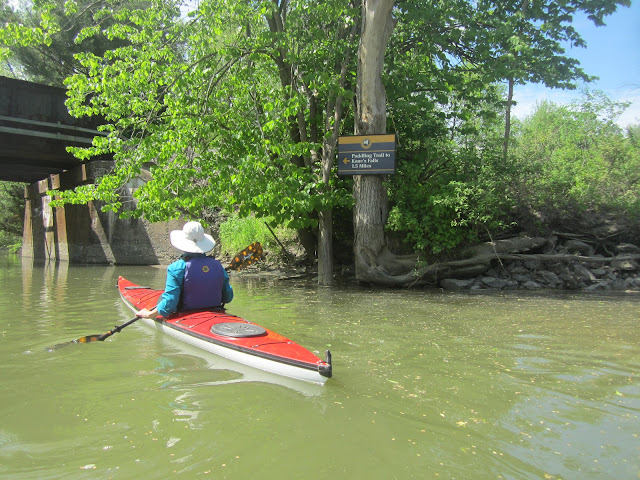 Just beyond the RR bridge you can explore a lock of the original 1823 Champlain Canal. The blocks of limestone and other carbonates were quarried locally and are in remarkably good shape although a Northern White Cedar is trying hard to pry them apart. 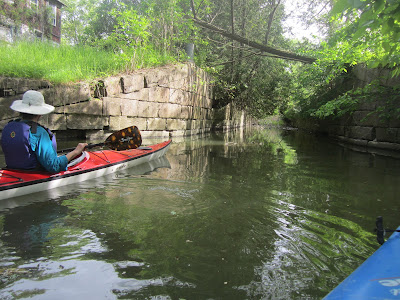 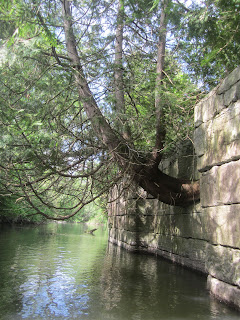 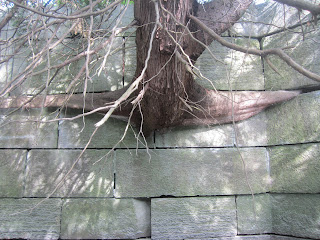 A short distance further takes you beneath the Rt. 4 highway bridge. Notice how all the transportation corridors cluster within a few feet of each other and follow routes established centuries earlier. Today agricultural, forestry and quarried products flow out of the area while Rt. 4 channels skiers and heroin into Vermont.
You could conceivably scramble up the bank beside the bridge to visit Battle Hill Brewery, a craft beer pub and restaurant, although it might be better to leave this worthy destination till after the paddling is done. Another option is to explore Mud Creek which joins Halfway thru a large culvert on the left. I've never been up it. If you try I'ld be interested in a report. 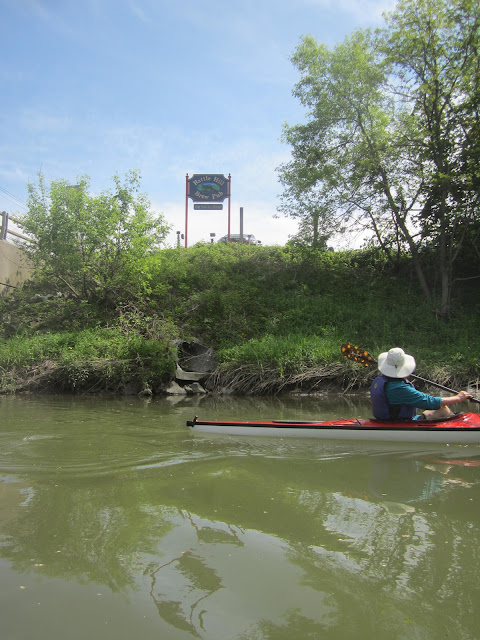 Leaving the village, the stream meanders in big loops, at times close to Co. 16 and then further away. You'll see a few houses and backyards but it's mostly wooded with mud banks that are good places to look for animal tracks. There is a current but it's manageable. Only a couple of places require hard paddling to make headway.
After passing under some power lines you will hear your destination before you see it. The sound of cascading water announces that you have arrived at Kanes Falls. Here Halfway Creek drops some seventy feet over a series of ledges in a fault scarp. While the bedrock appears to be limestone, much of the rubble at the base of the falls could be other types of rock. These look to be the foundation stones of the many industries that have taken advantage of the power here. 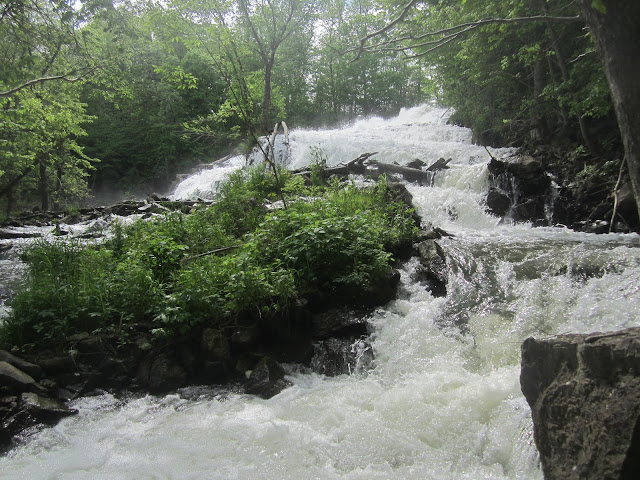 Sitting in your boat, what you see is a white stairway of frothing water thru a screen of trees. There's nary a clue that this has been a busy manufacturing site from pre-Revolutionary times until a little over fifty years ago. A partial list includes sawmills, woolen mills, tanneries and even a toothpick factory. At one time water flowed via aqueduct from here to Fort Ann Village. There were also boarding houses and a hotel. In the 1900's a seven foot diameter steel flume dropped sixty feet to the turbines of a hydroelectric plant at the foot of the falls. That building burned on December 5, 1960, never to be rebuilt, and some years later the dam at the top of the scarp was removed, restoring the falls to its pre-colonial state. 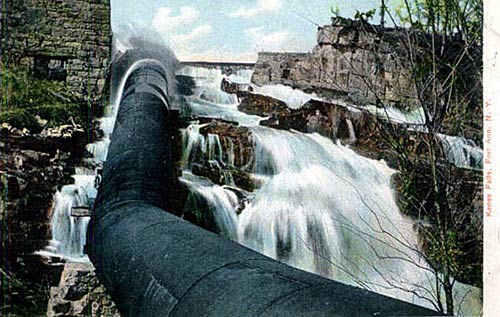 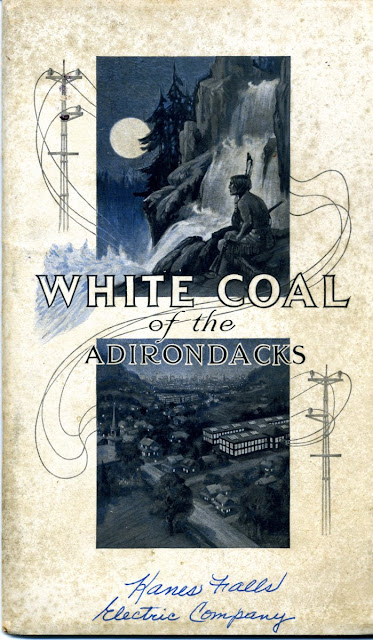 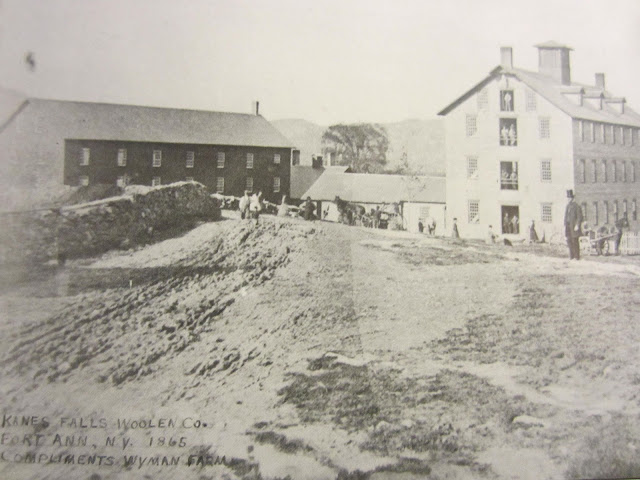 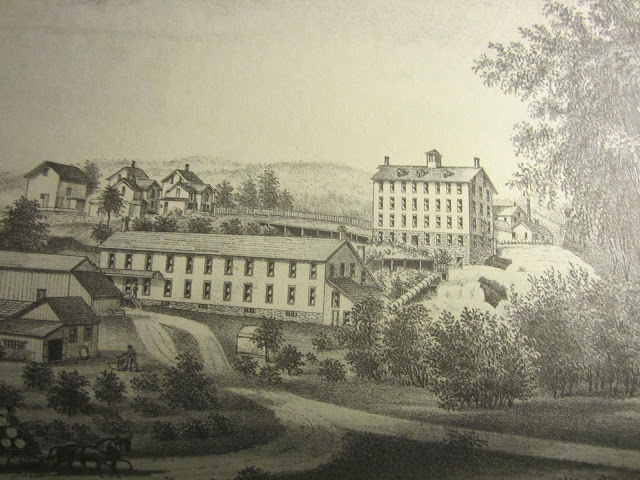 In the past you could visit the scenic top of Kanes Falls via a short path off of Co. 16. Today the land is private and posted. It joins a long list of interesting places in this part of Washington County that are all but inaccessible to the public. I'm thinking of Buttermilk Falls, the Hogtown blast furnace, Lakes Pond and Lake Nebo as well as Crossett and Sly Ponds, the sculpted rock of Winchell Creek and the ridgeline peaks of the Putnam and Fort Ann Mountains. Since our tax dollars are used to encourage tourism, it would be nice if more of the County's natural wonders were available for enjoyment. That would benefit visitors and locals alike. 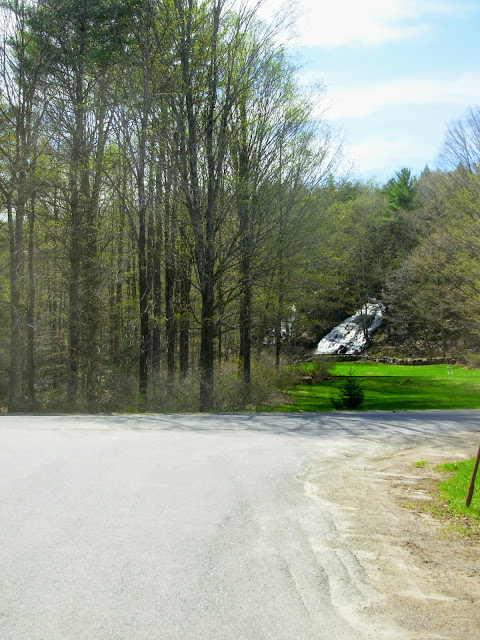 As close as you can get to Buttermilk Falls


Till then I'm grateful for Fort Ann's canal-side park and the Halfway Creek paddling trail. And for my little Swifty!
Kanes Falls awaits. Grab a boat and go as soon as you're able. 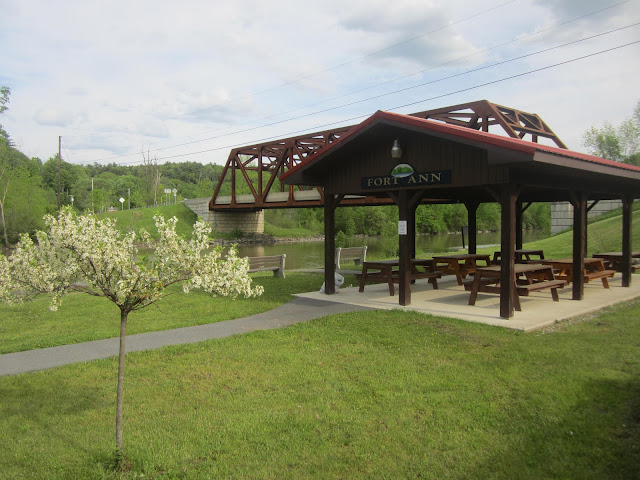 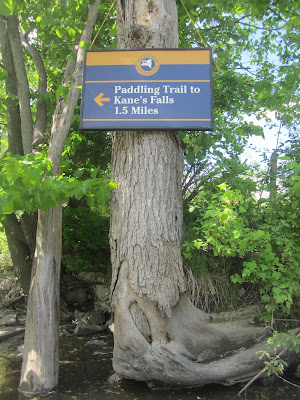 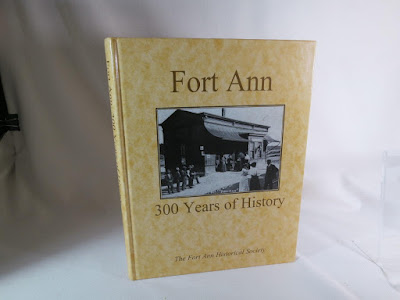 Reading Fort Ann - 300 Years of History by The Fort Ann Historical Society greatly enriched my visit to Kanes Falls. Fort Ann is a big, sprawling town with miles of Lake George shoreline, three distinct mountain ranges, numerous ponds and streams, and a scattering of small settlements. The book does an admirable job of covering the long history of the area. Be aware that it does sometimes confuse Wood Creek with Halfway Creek but that's a minor quibble in an otherwise highly useful volume.

Another spring paddling option is the Tinmouth Channel in nearby Vermont. Nestled in the fold between two Taconic ridges, this is the headwaters of the Clarendon River as it twists and winds thru an extensive wetland. Tom and Holly had a fun trip here a few weeks ago and I've included some of their photos to whet your appetite. 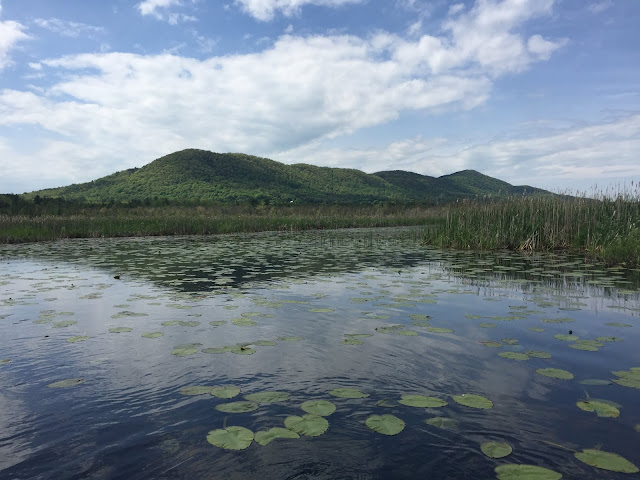 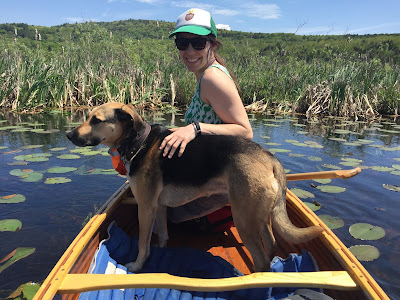 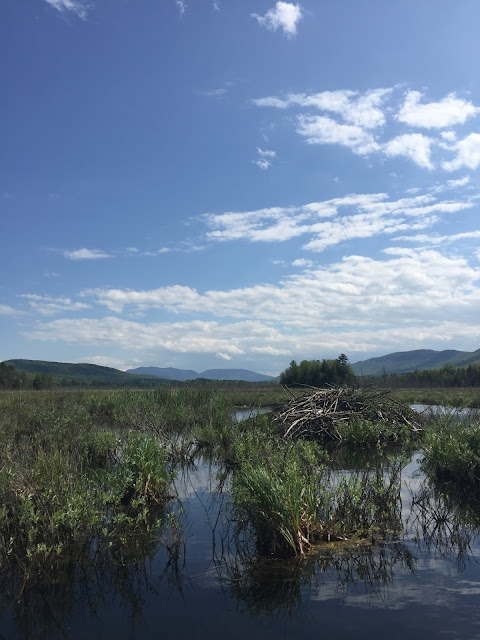